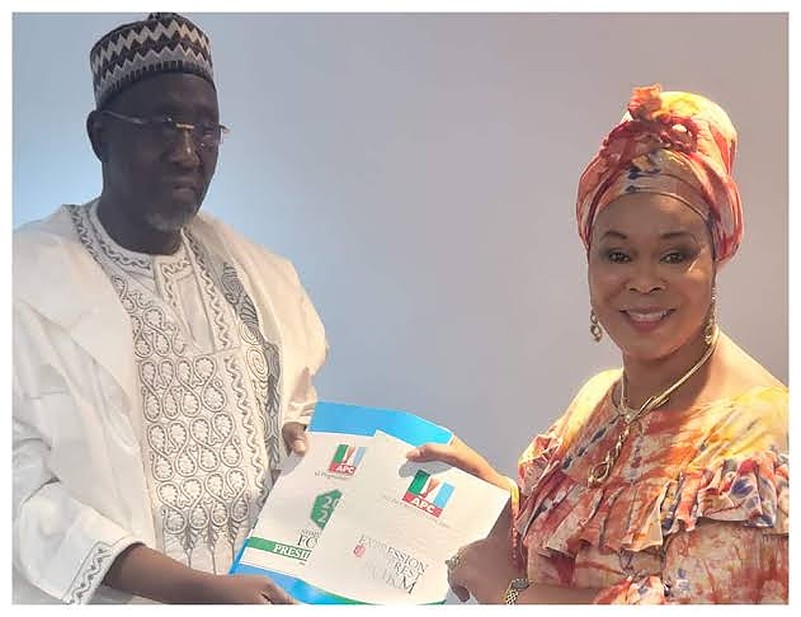 The All Progressives Congress (APC) got its first female presidential aspirant on Thursday as Ms Uju Ohanenye, bought the party’s Expression of Interest and Nomination forms in Abuja.

She told newsmen after picking the forms that male aspirants in the race would not succeed in intimidating her.

“My fear is that men will want to muscle me out, but I am standing firmly for the people I am here to protect.

“They will want to push me over, but I cannot be intimidated. I have been emboldened,’’ she said.

The News Agency of Nigeria reports that the APC’s presidential Nomination and Expression of Interest forms sell for N100 million.

Female aspirants, youths and persons with disability vying for any elective office on the platform of the party are to pay 50 per cent of the cost, however.

Ohanenye said like the male presidential aspirants, she had what it would take to lead the country to the next phase of development.

She said she would withdraw from the race for any aspirant with the vision and desire to address growing poverty and insecurity in the country.

The aspirant stressed, however, that as a mother, she had the magic wand to do things better.

“It is so obvious and all of us know that it is time for a mother to come on board.

“As it is today, considering the state of insecurity in the country and other things, children need motherly care; we can understand that from their attitude.

“I have never been a politician, but because of what I have seen, I just felt I should come on board.

“The major solution I am bringing on board is to involve the commoners and the less privileged in the governance of the country,’’ she said.

Ohanenye, a legal practitioner, said there was the need to involve the common man in the governance of the country and to create job opportunities for the teaming unemployed youths.

She said Nigerian youths were very intelligent and should not be allowed to be engaged in anti-social activities.

“I am going to localise the construction of roads and many other things.

“I won’t copy the Westerners all through because they have their ways of constructing roads which makes the construction very expensive,’’ she said.

She explained that locals would be engaged in road construction to get them involved and to enable them to earn incomes to reduce unemployment and keep the people busy and out of mischief.

Ohanenye explained that she was not interested in contesting for the governorship seat in her state because she doesn’t want to be limited to particular region or place.

“I want to be out for all Nigerians be you Christian, Muslim, male, female; I don’t care. I just want to be there to ensure that everybody feels good.

“Lack of love, selfishness and bias are the causes of insecurity; people no longer feel any sense of belonging or reason to live,’’ she observed.

She said she would support the speculated consensus option to pick APC’s presidential candidate on the condition that the major reason of her joining the race was addressed.

“Those issues concerning the downtrodden must be addressed.

“I don’t really care if any other person other than I takes up the responsibility, but the person must be one who will look into solving the problems of Nigeria,’’ she said.

More than 10 aspirants have so far joined the APC presidential race.

The APC special presidential primary convention is scheduled to hold from Monday, May 30 to Wednesday, June 1.

Share this on WhatsApp
Related Topics:APCfemale presidential aspirantfirst
Up Next