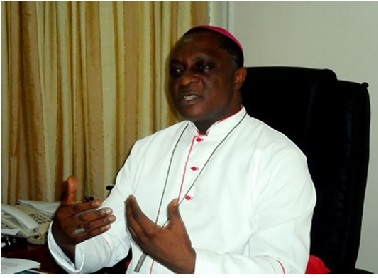 …tasks him on due process
By OdunewuSegun

The Catholic Archbishop of Lagos, Most Rev Alfred Adewale Martins, at the unveiling of the Archbishop Alfred Adewale Martins Catholic Faith Family Competition at the St Leo’s Catholic Church, Ikeja, Lagos,yesterday said most of the problems bedeviling the country is a direct consequences of deep rooted corruption.
Addressing journalists at the event, Archbishop Martins, said the body language of the present administration in the country shows that it is determined to tackle the menace, and must be commended. He however warned President Muhammadu Buhari to be mindful of the constitution when fighting corruption, according to him, the federal government must ensure that it follows due process, and must not use illegality to fight illegality.
“Corruption is the bane of the society, and must be tackled fearlessly. The Standard have fallen so low, but it must be fought within the ambit of the law because we have good laws, applying the laws seems to have been the problem” he said.
According to the cleric, President Buhari needed the wisdom of God to pull through in the fight against corruption in the country.
Most Rev Adewale Martins who was also honoured by the Knights of St John, Lagos Grand and the Ladies Auxiliary, initiators of the Alfred Adewale Martins Catholic Faith Competition, on his 32nd anniversary as a priest, said the nation needed a moral rejuvenation, and the competition which is family based is aimed to developing family values through the teaching of the bible.
“In the fight against corruption, it is hope that the initiative which targets the family and seeks to deepen knowledge of the catholic faith; especially in post-marriage adults will make important impact on the lives of the people, especially in their mindset and orientation”
Bearing his mind on same-sex marriage, the cleric said human values have been eroded and have therefore become too individualistic. He said the Alfred Adewale Martins is another step in the right direction at helping Catholics to deepen their faith by learning the bible and understanding God’s purpose and intention as it affects lives.
He therefore commended the Knights of St John, Lagos Grand and the ladies Auxiliary for coming up with such an initiative, especially at this particular times when many Catholics have been led away from the faith by people who quotes the bible often times wrongly.
The Grand President of the Knight of St John, Patrick Igwilo in his speech disclosed that the competition is another way by which the Catholic aims to inculcate bible teachings into its members through healthy competition with questions drawn from the bible.
He said people have lost touch with the teachings of the bible, and this is responsible for the high incidence of crimes in the country. He said the competition which covers all the parishes in the archdiocese; beginning with the small Christian communities and scaling up to the regional levels will help to teach the bible and also monitored the progress of all participants.
“The competition’s grand finanle comes up on the 18th of September, 2016, and we have as consultants, The Rt Rev John Aniagwu-the Vicar General and spiritual director of the Knights of St John, Rev Sister Judith Madueke and her Directorate are the chief collaborators”
Igwilo enjoins all Catholic parishes in the Archdiocese to key into this new initiative so that the current efforts of the Archbishop on the project shall not only reach all the lay faithful in the archdiocese, but that it shall bear fruits in families in such a manner that the current poaching on the Church will be reversed.

Nigeria’s Democracy and the rule of flaws