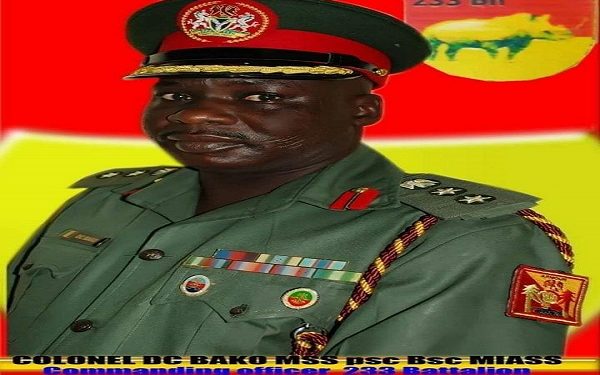 The Nigerian Army on Monday night confirmed the death of Col. D.C Bako, the commander of 25 Task Force Brigade of Operation Lafiya Dole.

He was said to have been ambushed by the insurgents while on patrol along the dreaded Damboa-Sabongari axis in the southern part of Borno. The said ambush ensued in a sporadic gun battle where the gallant officer was wounded and later died at a hospital in Maiduguri.

He conveyed the condolence of the Chief of Army Staff, Lieutenant General Tukur Buratai, to the family of the deceased officer, who was described as “one of the best”.

“We are most grateful for his contributions and sacrifices to the motherland. May God grant eternal rest to the gentle soul of Col DC Bako and the souls of all Nigerian Army officers and soldiers who paid the supreme prize in the defence of our father land,” the statement reads.

Borno Governor Babagana Zulum, in a statement by his spokesman, Malam Isa Gusau, said the sacrifice of Col Bako and those who pay the supreme price in the fight against the insurgency will not be in vain.

According to him: “It was public knowledge that I (Zulum) liked late Col. Bako and so did many people.

“Bako was a true soldier who inspired his troops and led them to front lines with exceptional courage that was clearly out of pure patriotism. He fought very hard and very well.

“He defeated many enemies of peace and protected many sons and daughters of Borno state to the extent he gave his life defending the people of Borno.

“We pray that Allah forgives his shortcomings and those of all our fallen heroes. The Government of Borno will continue to support through all means humanly possible, in trying to help them succeed in the ongoing war against the boko haram. We pray that God protects our troops and volunteers from recording any more casualties.

“I share the grief of Col. Bako’s family and the families of all those who have died fighting for Borno. I commiserate with theatre command of operation lafiya Dole in Borno state, the Nigerian army and the entire Nigerian military over the loss of a warrior.