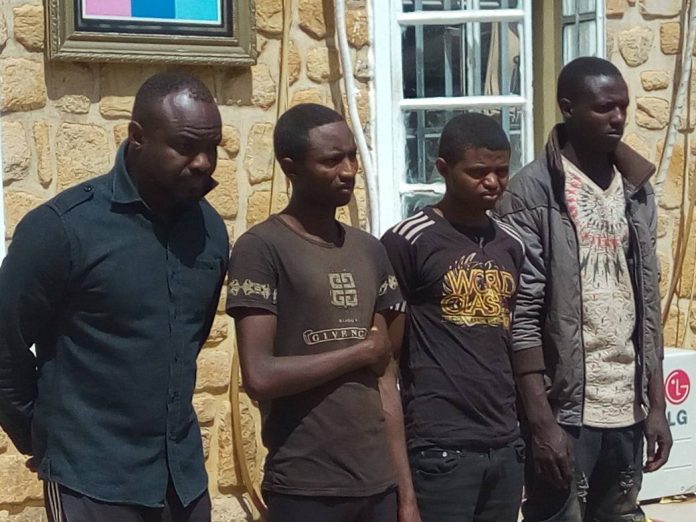 Share this on WhatsApp
Spread the love
By Kingsley Chukwuka, Jos
The Special Task Force (STF)  mandated to restore peace on the Plateau and some parts of Bauchi and Southern Kaduna, on Tuesday in Jos, paraded three Fulani herdsmen for cattle rustling.
Among the herdsman is a native of Berom who facilitates the cattle for onward purchase.
The taskforce also known as Operation Safe Haven (OPSH), said the syndicate were arrested for rustling cattle belonging to their fellow Fulani herdsmen, adding that the arrest was made at Bisichi, in Heipang community of Barkin-Ladi Local Government Area of Plateau State.
Speaking to newsmen, the Media and Information Officer of OPSH, Major Umar Adam said the suspected gang leader of the syndicate escaped and is being trailed by soldiers from the command.
However the OPSH Commander, Major General Anthony Atolagbe, in a statement signed by his Chief of Staff, Brigadier General Mohammed A. Bello, and made available to our correspondent said “On 19th January 2018 at about 3:30pm following a tip off by a member of Miyetti Allah Cattle Breeders Association, OPSH troops arrested four persons involved in rustling cattle at Bisichi in Heipan area of Barkin-Ladi LGA.
“The suspects includes Mr. Adamu Muhammed,18 years, Tanimu Usman, 24 years, Abdullranhan Muhammed, 15 years and 32-year-old Dawa Dalyop was arrested for buying the rustled cattle”.
The statement also reads that OPSH has deployed troops to Barkin-Ladi and Bassa Local Government Areas to trail the dealers of the rustled cattle and other crimes.
The statement contained that the command appreciate the traditional rulers, community and religious leaders in Barkin-Ladi, Riyom and Bassa Local Government Areas for continued cooperation and support in arresting cattle rustlers and criminals in the state.
However one of the arrested rustler, Tanimu Usman confirmed to have carry out the crime with his gang.
Share this on WhatsApp