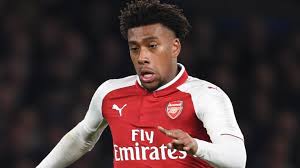 The Arsenal man sealed a three- year renewable deal with the electronics giants .

Speaking at the unveiling , Managing Director , LG Electronics West Africa Operations , Mr. Taeick Son , “ The choice of Alex Iwobi went through a thorough process and in the end we chose him , going by his antecedent in the field of play and most importantly how he is generally perceived as a player around the globe .

Alex said that “ For me this is a rare privilege and honour to be the brand ambassador of a renowned electronics giant as LG Electronics . It ’ s been amazing the way they’ ve treated me and I’ m honoured to represent them on- and- off the pitch; I’ m looking forward to a successful journey that we are definitely going to have . As an ambassador of the brand , I will continue to perform in ways that connect with the performance of the brand in millions of homes, ” he stated .

Also , Managing Director , Fouani Nigeria Ltd , Mohammed Fouani , was full of praise for the player , saying his goal last year against Zambia in Uyo , which earned Nigeria a place at the 2018 World Cup, played a major role in the decision to sign him on.

He stated , “He is skillful and full of youthful energy , an inspiration to millions of youths who one day long to play football; he indeed represents the future of football ; a quality that made him the preferred choice as a brand ambassador for LG Electronics .

“ When he scored that goal, it brought a lot of relief to 200 million Nigerians and we felt we wouldn’ t let it go without appreciating him . Our commitment is not to generate money but to sponsor talents in Nigeria . For us , there ’ s a hero (Iwobi ) amongst us , and he shall be honoured.”

Share this on WhatsApp
Related Topics:ARSENALIwobiLG ElectronicsSuper Eagles
Up Next