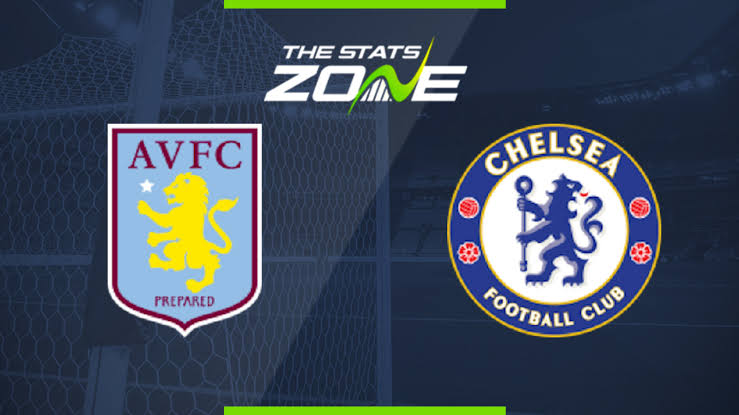 Share this on WhatsApp
Spread the love
Chelsea return to Premier League action for the first time in three-and-a-half months on Sunday when they take on relegation-threatened Aston Villa.
Frank Lampard’s side resume their campaign in fourth place, whereas Villa still sit 19th in the table following their goalless draw with Sheffield United on Wednesday.
While most clubs are practising caution financially during the coronavirus pandemic, Chelsea have been busy signing Timo Werner and being linked with a host of other expensive buys including Kai Havertz and Ben Chilwell.
With Hakim Ziyech also moving to Stamford Bridge next season Frank Lampard appears to be developing a force to be reckoned with, although their expenditure during an uncertain time surely also increases the importance of them qualifying for the Champions League next season.
That is far from guaranteed at this stage, although Chelsea are in pole position to claim the final top-four spot and enjoy a three-point lead over fifth-placed Manchester United heading into the weekend.
What the incoming arrivals may do is persuade those already at the club to try even harder to prove they deserve a place and Tammy Abraham, who helped fire Villa into the Premier League during a loan spell last season, will be particularly keen to impress.
Consistency will be key in the Champions League race and Chelsea may need to improve on that front, having won just two of their last seven league outings before lockdown.
The most recent of those was a convincing 4-0 victory over Everton, though, and another win on Sunday would give the Blues back-to-back top-flight triumphs for the first time since November.
Chelsea have accrued half of their points away from home this season, although their form on the road has tailed off since the turn of the year, with them having failed to pick up a win on their travels so far in 2020, after a run of seven wins in nine before that.
Not since December 2015 have Chelsea endured a longer winless run away from home, although manager Lampard had mixed fortunes at Villa Park during his playing days.
The former midfielder surprisingly only won four of his 16 Premier League visits to Aston Villa, although his last outing there saw him net a brace to become Chelsea’s all-time leading scorer.
For Villa, Sunday’s match will be their second back after lockdown and the first saw them given an unexpected helping hand by goalline technology as a freak mistake from the system denied Sheffield United a perfectly valid goal.
That mistake was the difference between a point and no points for Aston Villa, with the draw ending their run of five successive defeats and leaving them one point away from safety.
It was also a rare clean sheet for the league’s most porous defence after 29 games, although they have now failed to score in their last three top-flight outings.
Dean Smith’s side have a dreadful record against the ‘big six’ sides too – no wins and 19 defeats from their last 21 such meetings, picking up only two points from the 63 on offer during that time.
Villa’s record against Chelsea is particularly poor and the Blues are currently on their best ever winning run in this fixture of five in a row, while they have won nine of their last 10 Premier League games against the Villans.
The promoted outfit will have to pull off a shock somewhere along the way if they are to stay up, though, with five of their first six matches back after lockdown coming against members of the top seven.
Chelsea will be without Callum Hudson-Odoi as the winger continues to struggle with an ankle injury, but Reece James and Andreas Christensen are both expected to be fit.
Jorginho misses out through suspension as he serves the second of his two-match ban for accumulating 10 yellow cards prior to lockdown.
Fikayo Tomori is also unavailable due to a muscular problem, but N’Golo Kante is in contention, having initially refused to return to training due to coronavirus concerns and Ruben Loftus-Cheek could make his first appearance since May.
The three-and-a-half-month break has given some players, including Abraham, the chance to shake off injuries they were carrying before, although Olivier Giroud will hope that his form before the suspension will earn him more opportunities.
The Frenchman also has a fine record against Aston Villa, scoring in each of his last six meetings with them and netting eight goals in that time.
Villa are still without long-term absentees Wesley and Tom Heaton, while Danny Drinkwater is both injured and unable to play against his parent club.
The hosts will monitor the fitness of John McGinn after he returned from a lengthy absence in midweek, playing 76 minutes and coming through unscathed.
Smith will not be able to call on Bjorn Engels or Frederic Guilbert once again, though.
Aston Villa possible starting lineup:
Nyland; Konsa, Hause, Mings, Targett; Hourihane, Luiz, Nakamba; El Ghazi, Samatta, Grealish
Chelsea possible starting lineup:
Kepa; Azpilicueta, Rudiger, Zouma, Alonso; Kante, Gilmour, Kovacic; Loftus-Cheek, Abraham, Willian
Prediction: Chelsea to win. Both Teams To Score. Over 2.5.
Both of these teams need a win for very different reasons and, while Aston Villa have a game already under their belts, we are expecting Chelsea to be sharp enough to inflict another dent in the hosts’ survival hopes.
Share this on WhatsApp
Related Topics:Aston Villa FCChelsea FCEnglish Premier League
Up Next