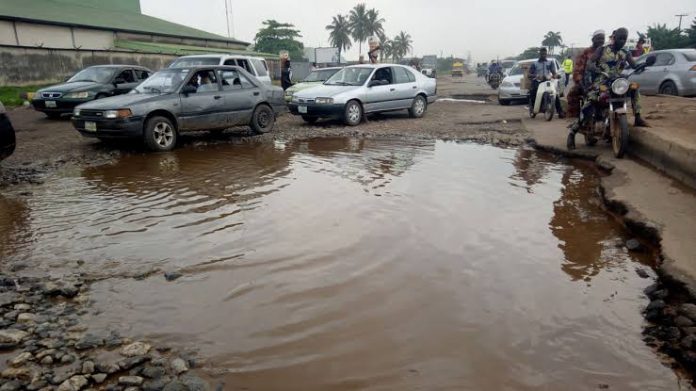 The development and maintenance of infrastructures in Lagos State has been suffering setback since the general elections and the denial of second term ticket of the All Progressives Congress (APC) to Governor Akinwumi Ambode by the party leadership. Since the departure of Ambode after his first tenure became a concluded matter in the state, contract sites have become scanty with workers, while the pace of work has been slowed down remarkably by contractors. In all the skirmishes, bad roads have begun to resurface in the state after about three years the government maintained constant repairs and rehabilitation of hundreds of rural roads linking the Lagos metropolis, giving the state a new phase of development of infrastructures. Several roads across Lagos State have been wearing off in the past few months of the 2019 general elections. The worn off became conspicuous as the rainfall begins to return in the past few weeks.

And of course, the consequences are obvious; traffic buildup or congestion on feeder roads to the city centre, which was improving in the past few years, are returning.  Commuters now spend much longer hours on certain spots, but surprised on getting to the point where the road becomes clear to discover that the traffic congestion was caused by a spot where the road has been washed off and sometimes water log.

Long queue of vehicles is now noticed at different link roads into Ikeja from the various satellite towns of Ogba, Ojodu Berger, Agege and others.

The Egbeda environs now witness worse traffic situations from the pre-existing problems. Festac, Satellite Town, Agboju, Alakija and the environs are not left out of the resurfacing bad roads and the attendant traffic crisis.

Satellite towns in the Apapa axis,, which include Wilmer, Olodi, Ajegunle, Orile, Alaba, Ijora, Amukoko, etc., are also having their own share of dilapidating roads, affecting the traffic situation as well.

Lagos Island is relatively unaffected. That part of the state has better road network and development ahead of others.

It would appear that Governor Ambode may be handing over the re-emerging crisis to the emergent Governor of Lagos State, Babajide Sanwo-Olu, who would be inaugurated on May 29, 2019.

A few indicators of disaffection were detected in the temporary conflicts between the governor and members of the Lagos State House of Assembly, culminating into threat by the lawmakers to impeach the governor. Also, the presentation of the 2019 budget to members of the state legislature was also delayed by the governor. The issues were resolved after the intervention of APC national leader, Asiwaju Bola Ahmed Tinubu, and the State executive, who convened a reconciliation meeting of the lawmakers and the governor. The impeachment threat was withdrawn and the budget was presented by the governor after the meeting.

However, issues of governance have continued to be slowed down unchecked; although, the governor has appointed a transition committee.

Meanwhile, the bad roads have continue to cause long queue of vehicles, commuters spending more time at bus stops waiting to move from one point to the other, while drivers and other roads users, including business owners, are losing business hours on the roads.