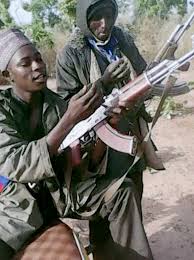 Bandits invaded Dogon-Ruwa community in Bali Local Government Area, Taraba State, killing about 12 persons in renewed attack. The bandits were said to have disguised as members of local vigilante, pretending to be in the community to arrest suspects, as they struck in Dogon-Ruwa, shooting sporadically.

The Police Public Relations Officer of the state command, Abdullahi Usman, disclosed in Jalingo  that over 50 people fled the community during the operations. The bandits were said to have also rustled animals in the community.

The police said that four suspects have been arrested and are being investigated.

The remains of the victims were said to be taken  to Bali town for Islamic burial.