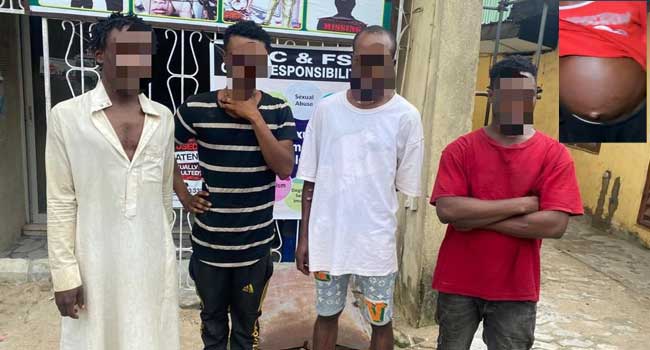 The Lagos State Police Command on Tuesday arraigned four suspects at the Apapa Magistrate Court for injecting two children with substances to induce their stomach to swell up in order to beg for alms in the public.

One of the kids was said to have exposed the syndicate at the Ojudu Police Division.

The Police Public Relations Officer of the Lagos State command, Benjamin Hundeyin, had revealed that the suspects display the children in road traffic as critically sick so as to get alms from motorists.

The suspects identified as Uchenna Eze (the manager), Onyedikachukwu Isiala, Ikechukwu Kingsley, and Smart Alasuomu, were charged with four counts bordering on conspiracy, placing and encouraging underage children in public places to beg for alms, deprivation of personal liberty and exploiting underage children, on arraignment before Justice Sikiru Adagun of the Apapa Magistrate Court.

The police argued that the offences are punishable under the Criminal Law of Lagos State 2015.

The children were said to be between 11 and 13 years.