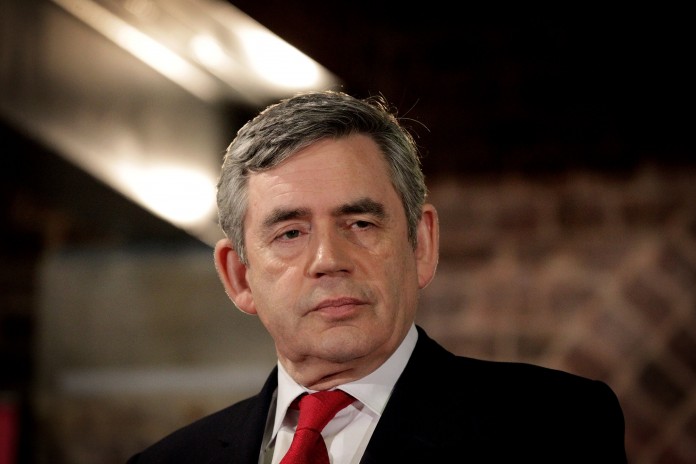 The second anniversary of the Chibok schoolgirls abduction sparked up a debate on whom to stitch up for doing too little about the girls’ continued bondage: President Muhammadu Buhari or his predecessor Goodluck Jonathan?

Buhari, the new commander-in-chief who inherited the #BBOG baggage, is about the only one you can tap to take the knock. And the 73 year-old-general has been taking the flak in his stride. He’s also been sweating hard to be a democrat: he keeps begging off each time the girls’ parents demand their daughters’ rescue.

But on the other side of the Pond, where democracy has been as old as the hills, some guys don’t want to swallow insults for democracy’s sake. So they’ve been slugging it out.

“No, we aren’t responsible for Chibok girls,” said Doug Bandow, an American policy scholar. He was reacting to UN Special Envoy Gordon Brown’s broad-brush swipe at the West for watching the girls go helplessly into Boko Haram’s captivity. Brown stated it in an article—The World Should Be Ashamed of the Failure to BringBackOurGirls—he published on Huffington Post recently.

Bandow especially pitched into the British ex-prime minister, deriding him as a washed-up demagogue offering a political solution to a terrorism problem escalated by the Nigerian government’s irresponsibility.

“What do you do after you brought your party’s control of government to a dramatic end? You become an international scold and blowhard, blaming the world’s problems on everyone else—who have no ability to solve any of them,” he wrote in a sarky piece published on Forbe.com last week.

He described Brown as one of the has-beens and once-weres world bodies often bring in as decorations for international summits.

To the former adviser to Republican President Ronald Reagan, the education problem Brown was trying to blow up is natural in poor countries.

“And there’s not much the international organization can do for a service that can only be delivered locally,” Bandow said.

According to him, in poor countries education standards crash further  the more the national government gets involved.

“Inexpensive private schools often are the only hope for the most disadvantaged and marginalized people in the most impoverished and oppressed nations.”

Nigeria is not oppressed in that sense, really. It’s only fighting an insurgency that has been steeped in Islamic terrorism for six years now. And the mujahedeen want to end Western education across northern Nigeria, leading to the kidnap of 276 girls about two years ago.

Brown, in his article, said those enslaved girls “are now a symbol of our apparent weakness to protect young lives.”

That further got Bandow riled up.

“I didn’t realize that I should have spent the last two years attempting to “secure” the girls’ release,” he said,  “Moreover, I shudder to admit, I didn’t view my inability “to protect” their lives—kind of hard given geography and nationality—as a result of my weakness.”

While the writer admitted the kidnap was a tragedy, he insisted it was not some unexpected act of nature. The Middle East and North Africa are in the same boat. “It succeeded because the security forces that should have been guarding the school and students—police and military—failed to fulfil their responsibilities.”

He said the blame is widely shared, but not by “us.” He blamed Saudi Arabia, first, for promoting radical Islamic fundamentalism around the world.

“Indeed, the Saudi royals and others like them have made it hard for Nigerians to protect their “young lives.”

One of the solutions Brown gave was “emergency aid funding” for education to be increased. That beat Bandow, who believes, the UN envoy is out of touch with realities.

“Indeed, there isn’t much evidence that tossing money at schools increases educational attainment even in peaceful settings,” Bandow countered. “A new global funding program would, however, presumably reflect well on the special envoy’s efforts.”

From his trove of nuggets of wisdom, Brown also brought out foreign intervention and encouragement suggestion, which indeed has been in effect for years now. There are lots of American and British boots on the ground in Nigeria. But as for the “encouragement,” whatever that means, said Bandow, merely creates the appearance of doing something.

Again, the UN envoy wrote about his pet project in Nigeria: the Safe School initiative.  “We could and should do far more to protect children from attacks and abductions when in school,” he wrote.

Bandow, tongue in cheek, took that to mean slinging on an AK-47 in the US, and heading to a local school in Nigeria to take up picket duty—to save the world.

“Moreover, how do “we” prevent “attacks and abductions” at, presumably, not just Nigerian schools, but schools in every nation around the world? After all, children are shot and killed in schools in poor neighborhoods in Washington, D.C., America’s capital,”

According to him CCTV cameras all over school premises aren’t even enough to confront Boko Haram and keep school safe,

He also picked on Brown’s advice the UN Security Council should adopt a resolution that holds the perpetrators of future child abductions accountable so that the full weight of international pressure is brought to bear.

The imagery Bandow could make of that was Ban Ki-Moon standing in the parched savannahs of north-eastern Nigeria waving the resolution document to the world’s bloodiest terrorist Abubakar Shekau to surrender himself for trial in the Hague.

That’s not necessary, Bandow thought. “What is needed is a competent and honest national government able to govern fairly and apply military force where necessary,” Bandow quipped.

It is not really clear why this American descended so ferociously on Brown and his treatise. But the attack, apart from being personal, seemed targeted at showing up the UN envoy as a fathead as far as international policies go. And that no amount of political statements from the world body can crowd out national interests that underlie international relations.

Bandow himself hardly proffered an out-of-this-world take on the abducted Chibok girls release. His is a non-interventionist free throw; that everybody has to fight their own battle.

“Instead of blaming the rest of us for problems well beyond anyone’s control, Brown and others like him should bring their ambitions back to earth,” he said.

“Millions of kids around the world currently denied the chance to prepare for a better future need practical help in their local communities, not UN resolutions, international declarations, and pompous proclamations from special envoys.”