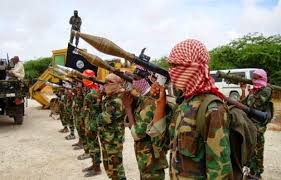 Residents and indigenes of two states the North East, Nigeria have raised alarm that  Boko Haram terrorists are still holding and having control over many local governments in the states in spite of  the claim by the federal government that it has defeated the terrorist group.

Residents of Borno and Yobe states, were gathered to have maintained that militants of the Islamic State in West Africa (ISWA), led by Musab al-Barnawi, held sway over a territory spanning an estimated 100 miles (160 kilometers).

It was noted that Boko Haram altered its identity to ISWA when the terrorists aligned with Islamic State in 2015, the year President Muhammadu Buhari pledged to defeat the group.

“Definitely Boko Haram is very much present in our area. They even mount roadblocks, conducting stop and search operations the way the military does. Luckily, they don’t kill people in this area,” Ahmad Muhammad, resident of Damboa, Borno State, was cited to have said.

Residents further disclosed that the terrorists have been collecting taxes from citizens in return for what they said was “protection”.

Mohamed Ibn Chambas, UN Special Representative of the Secretary-General for West Africa and the Sahel, had acknowledged that he was not surprised by the revelations of the residents in Borno and Yobe states because it was wrong to assume Boko Haram was totally defeated.

“Unfortunately, this kind of struggle is difficult to eliminate completely in the short-run. What is not in doubt is that good progress has been made against Boko Haram. Most of their territory has been taken away and they have been pushed to remote areas and are being pursued there,” Chambas had observed.

The authorities of the Nigerian military at different times refuted the claims, insisting that no territory was under ISWA control.

In 2015, President Muhammadu Buhari pledged to defeat Boko Haram, and officials insist this has been achieved. At the time he also told media that Nigeria had “technically won the war” against the militants. But the conflict, now in its tenth year, continues.

The multinational task force that fought the terrorists could not put an end to their violent uprising. The bombs are still exploding, while a few suicide bombers are, however, frustrated sometimes, Boko Haram terrorists are still engaging the Army in gun battle, school girls are still victims of abduction, in the regime where Boko Haram have been technically defeated by the Nigerian government.

Over 250,000 people have been killed and about one million displaced and seeking refuge in IDPs camps in the 10 years of Boko Haram terrorism in Nigeria, Chad, Cameroon, and Niger.

Share this on WhatsApp
Related Topics:Boko Haram terroristsIslamic State in West Africa (ISWA)Nigerian Army
Up Next