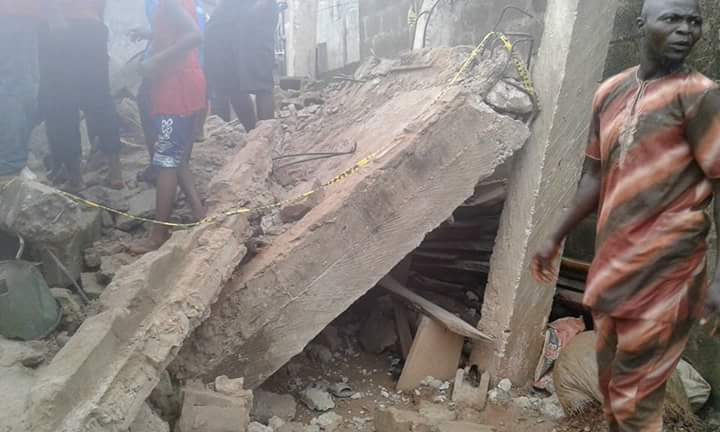 Share this on WhatsApp
Spread the love
No fewer than six persons have been reported dead as the death toll rises after the Tuesday’ incident of collapsed building in Lagos.
Ibrahim Farinloye, the south-west spokesperson for the National Emergency Management Agency, NEMA, said this on Wednesday.
He added that 15 people have been rescued from the ruin at Tokunbo, off Odunfa Road, Carrena/Martins Street, Lagos Island.
According to him, another 11-year-old boy was pulled out of the debris alive at about 4.00 a.m. on Wednesday.
He said that an 11-year-old boy, who had his two legs chopped off, was also rescued alive on Tuesday.
ALSO SEE: 4-storey building collapses in Lagos Island
The rescue team comprising Lagos State Emergency Management Agency, LASEMA, Response Unit, the police, Lagos State Ambulance Service and the Lagos State Fire Service are still working at the scene.
Also, Adesina Tiamiyu, the LASEMA General Manager, also said that the rescue operation was ongoing.
Tiamiyu said that erection of a telecommunication mast very close to the building contributed to the collapse.
“Heavy duty equipment is searching through the rubbles,” Mr. Tiamiyu said.
A similar incident happened on Saturady at No. 7, Saidu Okeleji St., off Alaro Street, Meiran in Abule-Egba on Lagos-Sango-Abeokuta Expressway.
LASEMA’s spokesperson, Adebayo Kehinde, said that a five-year-old girl was rescued alive from the Saturday’s incident and was immediately taken to the General Hospital, Ikeja, by the State Ambulance Service.
Share this on WhatsApp
Related Topics:Collapsed BuildingLagos State Emergency Management AgencyLagos State Emergency Management Agency (LASEMA) Mr. Adesina TiamiyuNational Emergency Management Agency (NEMA).Rescue
Up Next

“I lost my parents while in school, graduated with first class in electrical engineering”