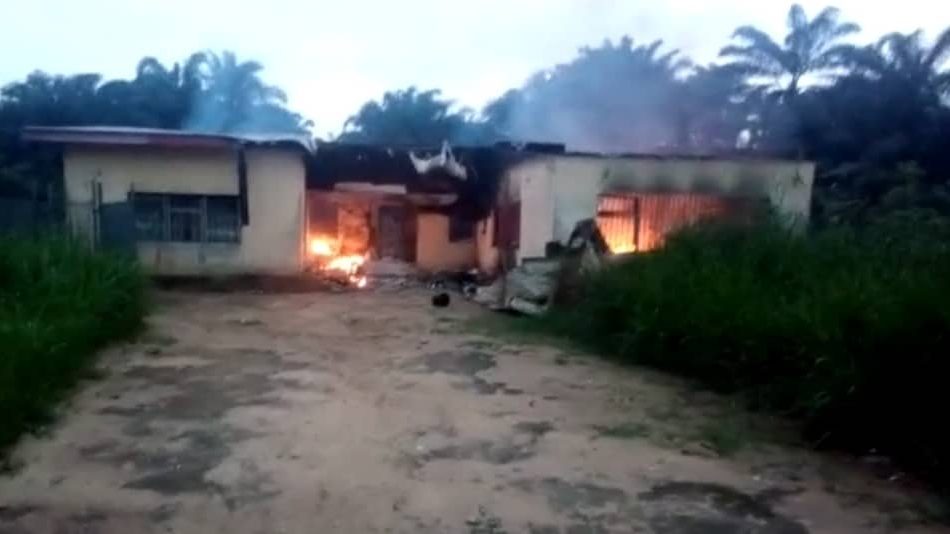 The office of the Independent National Electoral Commission (INEC) at Ogurute, in Igboeze North Local Government Headquarters, Enugu State has been set ablaze by unknown arsonists

Sources gathered that the office was set on fire Sunday night and the affected building was totally burnt.

The Council Area has come under attack recently by unknown gunmen leading the state government to impose a 6pm to 6am curfew in both Igboeze North and Igboeze South Local Government Areas.

Heavy security personnel have also been moved to the area to check the invasion and the battle has continued to linger.

Although, no casualty was recorded at the time of filing this report.

However, both fire trucks from Nsukka and Ogurute were mobilized and reportedly fought the fire that prevented collateral damages on the INEC facility.

The State INEC resident Electoral Commissioner Dr. Emeka Ononamdu confirmed the incident, and said the commission is yet to ascertain the level of damage.

South East INEC facilities have come under several attacks with activities of unknown arsonists, attacking federal infrastructure in the Sub-region.

“Although no casualties were reported, 748 ballot boxes, 240 voting cubicles, office furniture and equipment were destroyed in spite of the best effort of the Enugu State Fire Service deployed from Nsukka,” Okoye said.

He said that the commission was working to ascertain the status of voter registration machines for the ongoing Continuous Voter Registration (CVR) as well as uncollected Permanent Voters Cards (PVCs) locked up in the fireproof cabinet.

Okoye recalled that on May 23, 2021, INEC office in the neighbouring Igboeze South Local Government Area was attacked in a similar manner by unknown gunmen.