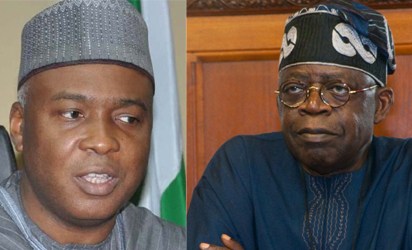 Senate President, Bukola Saraki has accused the National leader of the All Progressives Congress, Bola Tinubu, of misrepresenting facts all in his bids at casting aspersions on his person as the senate president over allegations of budget padding.

A statement issued by Saraki’s spokesperson, Yusuph Olaniyonu, said Tinubu released another of his now well expected quarterly vicious attack on the person of Saraki, saying that in the statement, one could see the master of media spins getting ensnared in his own game as he struggled to extricate himself from the narratives about the contest for leadership positions in the Ninth National Assembly.

“Since we have taken it for granted that Tinubu’s attack on Saraki every three months will come as expected, we would just have ignored his statement but for the fact that it was filled with untruth, fallacies and misrepresentations. The statement was another effort to sell a concocted narrative about the Eighth National Assembly and its leadership.

“First, he alleged that national budgets were delayed, distorted, padded, new projects introduced, funds for projects reduced, “to halt progress of government”. It is unfortunate that a man like Tinubu who had been in the Senate (though for 22 months and under a military regime) should have a better understanding of how the legislature works. The passage of budgets is definitely not the exclusive responsibility of the leadership of the Senate. Most of the work is done in the various committees.

According to the statement, it was also a known fact that any so-called delay in the passage of budgets under the Eighth National Assembly was traceable to the refusal of heads of MDAs to defend the budget proposals for their agencies on time, saying that last year, the President himself had to direct the Secretary to Federal Government to compel heads of MDAs to appear before the National Assembly committees following the report made to him by Dr. Saraki and Speaker Yakubu Dogara.

“So, if a man like Tinubu is spreading this falsehood about budget passage and delay being deliberately orchestrated by the National Assembly leadership, one wonders whether he tries to even understand what happens in the federal legislature at all or is that the only thing that is of interest to him is.

“We invite Tinubu to look at the records of the time of submission of budgets and their passage since 2010 and he will see that with the exception of the 2013 budget which was passed on December 20, 2012, all the budgets have been passed between March and May of the same fiscal year.