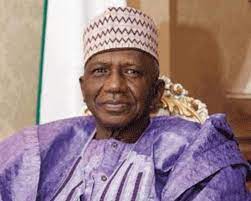 President Muhammadu Buhari says he shares the joy of the occasion with former Nigeria’s High Commissioner to the United Kingdom, Senator Dalhatu Tafida, on his 82nd birthday, Nov. 24, 2022.

President Buhari in a statement by his media aide, Femi Adesina, on Wednesday in Abuja conveyed his congratulatory message to Tafida, adding that he celebrates with family members, friends, and associates of the medical doctor, who schooled in some of the best medical institutions in the world, and out of patriotism returned to work in Nigeria.

The president also noted Tafida’s contributions to the growth of the country as Minister of Health.

He described Tafida’s national award in 1983, Order of the Federal Republic, as “most deserved as his profile in public service, both in appointments and elections, continues to awe and inspire.”

President Buhari prayed that the almighty God would grant Tafida a longer life, good health, and strength to keep serving the country and humanity.