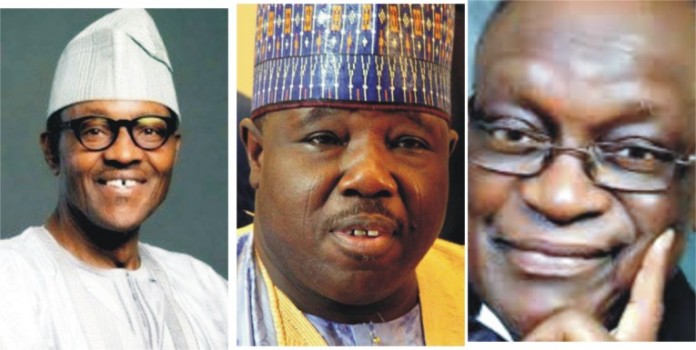 • President betrayed from within – Iloh

THE task of enforcing socio-economic change regime is seldom value free or given. This has reflected in the All Progressives Congress (APC) Government under the superintendence of President Muhammadu Buhari contention with plethora of social forces, both within the “in group” and the “out group” in the struggle for a new reform regime.

The emerging change regime degenerated into divers economic chaos, at the inchoate stage, threatening the basics of growth and development of the economy of the country.

The manifest indices reflected in the creative scarcity of Premium Motor Spirit (PMS) with its multiplier effects of high rise of transportation fares, rise in prices of household needs and social services, wastage of work hours from long queues at petrol stations, among others.

Petrol, ironically, sold at N200, even N230 per litre at certain stations while it rose to as much as N300 per litre in the ‘black market’ contrary to government regulatory price of N86.50 per litre.

Both indigenous and foreign stakeholders became victims of unreasonable exploitation by petrol retailers and miscreants who engaged in illicit trade.

More so, foreign exchange regime was causing its own nightmare to managers of the economy.

To exacerbate the economic chaos, the perennial low electricity supply further made life miserable for citizens, in addition to the effect on businesses.

Perhaps, the perturbing consequences may reflect in deep emasculation of capacity building and capacity utilization in the economy, consequences that may take unpredictable time for recovery.

In the heat of the economic chaos, President Muhammadu Buhari had shifted bulk of the blames to the Peoples Democratic Party (PDP), which lost control of the federal government about 11 months ago, accusing the leaders of failing to save for the rainy day.

That appeared a marked point of distraction or feeling of tentative frustration in handling the leadership challenges.

The national leader of the APC, Asiwaju Bola Ahmed Tinubu, also added to the blame trading.

The PDP responding, had argued: “It is not for nothing that the APC almost always blames the PDP for Nigeria’s current state. PDP ruled Nigeria for 16 years; the APC has been there for less than a year. And that is an important point. Lai Mohammed, the former APC spokesman and now information minister, has a special talent for pointing that out…”

PDP leaders recalled that President Buhari, last week, once again blamed the PDP for failing to save for the rainy day, a factor, which he said, is responsible for the prevailing mess in the country.” They added that the President also said in a different forum that same day: “we showed a lot of indiscipline in managing our economy, and that is why we are where we are today.”

They also remarked that Tinubu, who had criticised the Minister of State for Petroleum Resources, Ibe Kachikwu, less than two weeks ago over an insensitive comment and his failure to solve the unending fuel crisis, suddenly made an about-turn this week and blamed the PDP for the fuel crisis.

PDP expressed the belief that the APC Government has spent enough time in power to start being held responsible for their own actions and inactions.

Inaugurating four Special Committees in Abuja, last week, PDP National Chairman, Ali Modu-Sheriff, told the APC Government to face the business of governance and quit blaming the previous government, noting that about one year has gone by, “and that is enough time for the APC to have charted its own course.”

“I would like to advise the leaders of the APC to stop blaming us in the PDP, we are now in the opposition party, repositioning our party to show Nigerians that we could do better,” Modu-Sheriff had declared.

Also, a former Governor of Kano State, later Minister of Education, Malam Ibrahim Shekarau, was gathered to have lamented that almost a year after assuming power, the change mantra preached by the APC has turned out to be a ruse.

Shekarau, addressing PDP supporters at his residence in Kano after the constitution of a 44-man sub-committee, was said to have declared that “those promoting the change mantra have now ended up rewarding electorates with hunger, poverty, illiteracy and embarrassing queues at our filling stations.”

He had noted that, “The first quarter of the year has already passed without a working budget for the country.”

Meanwhile, speaking to National Daily, Dr. Moses Iloh, an elder statesman, a strong advocate for good governance and emancipation of the poor, was of the view that Buhari should look inward for the people plotting to frustrate his administration and the change agenda. He emphasized that the same people who brought Buhari to power are now working against so that he will fail; arguing that, “if Buhari succeeds, many of the people surrounding him will be in trouble.” He maintained that Buhari is being attacked by people around him.

The elder statesman, also a clergy in Lagos, reiterated that Buhari was sent by God to redeem Nigeria. He said that Nigeria is a dead country that Buhari has come to, first, exhume from the grave, then, apply appropriate therapy to heal, before rebuilding the country. He advocated that to achieve this, Nigerians must support the President.

Dr. Iloh described Buhari as a rallying point for Nigeria’s unity, observing that there may be no Nigeria if Buhari is forced out of office. He further expressed perturbation that the country may not find credible leader to succeed Buhari, even after 2019, lamenting that Nigeria may fall back to corrupt leaders. ‘If they remove Buhari, who will step in, is it not another corrupt leader,” he stated.

Dr. Iloh admonished that Christianity is not a religion but a way of life, urging pastors to minister change of ways of life in their followers. He was of the view that the church must be part of the change agenda of the present administration.