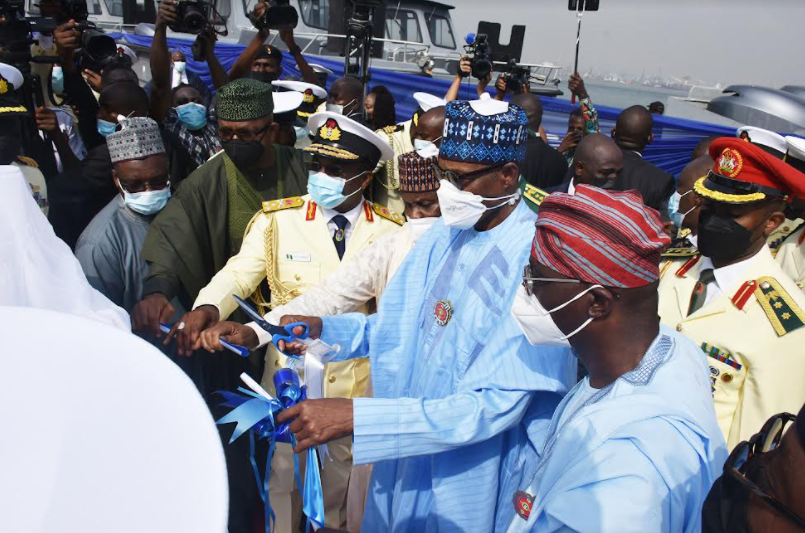 President Muhammadu Buhari has reiterated his administration’s commitment in tackling insecurity in the country, and also urged Nigerians to believe in the capacity of the country’s armed forces to bring long lasting peace and stability to Nigeria.

Declaring open the 12th Nigerian Navy Games, LAGOS 2022, the President assured Nigerians that the armed forces would continue to sustain their operational tempo to contain the security challenges in the country.

The President also re-emphasized the importance of synergy between the armed forces, other security agencies and the general population for peace and security.

‘‘The construction of this sports complex has provided a standard venue for the Nigerian Navy to host major games as well as an appropriate venue for naval personnel within Lagos to use for training and other recreational purposes.

‘‘I am therefore confident that besides the conduct of the Games, the Nigerian Navy and its personnel will continue to make good use of the facilities in this complex,’’ he said.

The Commander-in-Chief of the Armed Forces expressed the hope that the Games would provide the needed platform and avenue for the discovery of new talents that will represent the Navy and Nigeria in international competitions.

‘‘The Games should therefore provide a glimpse of what Nigerians expect from the Nigerian Navy; dedication, commitment, unity, oneness and comradeship,’’ President Buhari said, assuring that the Federal Government will continue to encourage sporting activities in view of its importance towards national cohesiveness and unity.

The President also thanked the Lagos State government for supporting the Games and cooperating with the military in the State, describing the goodwill as highly commendable.

In his goodwill message, Governor Babajide Sanwo-Olu of Lagos described the Nigerian Navy as a strategic partner to the ‘‘coastal State of Lagos’’ on security of lives and property.

He, therefore, thanked the President for approving the establishment of a new Forward Operating Base (FOB) in Lekki axis, one of the fastest growing industrial, commercial and residential development areas in West Africa.

The Chief of Naval Staff pledged that the Navy would sustain the fight against crude oil theft and other maritime crimes, ensuring that the country maintains its delisting from nations of high piracy risks.

He expressed delight that Nigeria exited from the International Maritime Bureau’s Piracy List early in the year and no incidence of piracy has been recorded in the last one year, adding that this attests to the Nigerian Navy’s willingness and resilience to ensure a safe and secure maritime environment for socio-economic activities to thrive.

The Naval Chief noted that contemporary warfare generally described as being volatile, uncertain, complex and ambiguous, places a huge demand on personnel combat readiness and thus necessitates the need to sustain high levels of physical fitness and mental alertness.

He added that physical fitness and mental alertness of personnel has become key considerations for armed forces to meet increasing demands of the current operations environment of the Nigerian Navy, which has recorded significant appearances at local and international competitions.