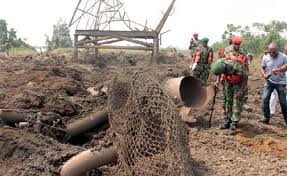 President Buhari said past looters of the treasury are behind the resurgence of militancy in the Niger Delta region, stressing that they are the reasons the nation is battling recession.

Speaking from faraway in the United States where he is attending the United Nations General Assembly, President Buhari who did not specifically mention any names, was quoted in a statement issued by Mr. Femi Adesina, his Special Adviser on Media, as saying: “Those who stole Nigeria dry are not happy.

According to Mr President, “They recruited the militants against us in the Niger Delta, and began to sabotage oil infrastructure. We lose millions of barrels per day, at a time when every dollar we can earn, counts. It is a disgrace that a minimum of 27 states, out of 36 that we have in Nigeria, can’t pay salaries.”

National Daily had authoritatively reported earlier that wife of former president Jonathan, Patience, was being recently hunted because of intelligence reports that she had links with the Niger Delta Avengers and other splinter militant groups in the region. This is even as those close to the former First Lady have denied any such links.

According to the statement, President Buhari spoke to top rate Nigerian professionals based in the United States of America, whom Mrs. Abike Dabiri-Erewa, Senior Special Assistant to the President on Diaspora Matters and International Relations, described as “15 of the best people God ever created.” The professionals were in New York to meet with the Nigerian President. Top flight aeronautics engineers, physicians, I.T experts, a Judge, a top policewoman, entrepreneurs, an Import Specialist at Customs and Border Protection, professors, two straight A students, and many others.

National Daily gathered that the parley provided President Buhari opportunity to bring them up to speed on how and why Nigeria got into trouble, with an assurance that with all hands on deck, including the best brains in the Diaspora, the country would bounce back in the shortest possible time. “I am very pleased with this meeting,” President Buhari stated. “Wherever you go in the world, you find highly competent and outstanding Nigerians. They not only make great impact on their host countries and communities, their financial remittances back home also help our economy, particularly at a time like this, when things are down.

“We got into trouble as a country, because we did not save for the rainy day. For example, between 1999 and 2015, when we produced an average of 2.1 million barrels of oil per day, and oil prices stood at an average of $100 per barrel, we did not save, neither did we develop infrastructure. Suddenly, when we came in 2015, oil prices fell to about 30 dollars per barrel. “I asked; where are the savings? There were none. Where are the railways? The roads? Power? None.

He continued: “Talking of our military, they earned respect serving in places like Burma, Zaire, Sudan, Liberia, Sierra-Leone, and then, suddenly, that same military could no longer secure 14 out of 774 local governments in the country. Insurgents had seized them, calling them some sort of caliphate, and planting their flags there; till we came, and scattered them. “We raised the morale of our military, changed the leadership, re-equipped and retrained them; USA, Britain, and some other countries helped us, and today, the pride of our military is restored.

“Boko Haram ran riot, killing innocent people in churches, mosques, markets, schools, motor parks, and so on. And they would then shout Allahu Akbar. But if they truly knew Allah, they would not do such evil. Neither Islam, nor any other religion I know of, advocates hurting the innocent. But they shed innocent blood, killed people in their thousands. Now, we have dealt with that insurgency, and subverted their recruitment base.”

“But I prayed so hard for God to make me President. I ran in 2003, 2007, 2011, and in 2015, He did. And see what I met on ground. But I can’t complain, since I prayed for the job. In the military, I rose from 2nd Lieutenant to Major-General. I was military governor in 1975 over a state that is now six states. I was head of state, got detained for three years, and headed the Petroleum Trust Fund (PTF), which had N53 billion of that time in Nigerian banks.

“God has been very good to me, so I can’t complain. If I feel hurt by anybody, I ask God to help me forgive. He has done so much for me. “After 16 years of a different party in government, no party will come and have things easy. It’s human. We need quality hands to run Nigeria, and we will utilize them. I will like to welcome you home when it’s time. But I’ll like you to be ready.” All the Nigerian professionals pledged to contribute their quota towards re-launching their fatherland to a new dawn.