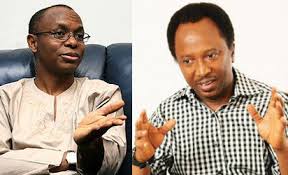 Sani let loose a volley of verbal missiles on the person and career  of the governor, using words that cannot just be described as insults, but also curses, including referring to el-Rufai as a pygmy.

According to the senator, the governor was angry because President Muhammadu Buhari left him out of his entourage to the 74th session of the United Nations General Assembly in New York.

In a statement he personally signed and made available in Abuja on Friday, he described the governor as “a patented traitor and leech on the throne of power.”

“A boot licking, butt licking Accidental Governor with no civil service experience other than subservience to any person in power,” he said.

“A rabidly ambitious pygmy with speciality.

“A patented traitor and leech on the throne of power.

“A certified religious bigot and attested ethnic irredentist; a poison in the pack of a toothpaste.

“A little Hitler, a fake progressive with a honour as minute as his height

“Elrufai is angry the villa dropped his name from UNGA in New York.

The last time the duo sparred was when el-Rufai claimed he has ended Sani’s political career, and reduced him to a blogger.

Sani left the APC in the height of his war with the governor. He lost his return ticket–and lost his re-election bid in his new party PRP.