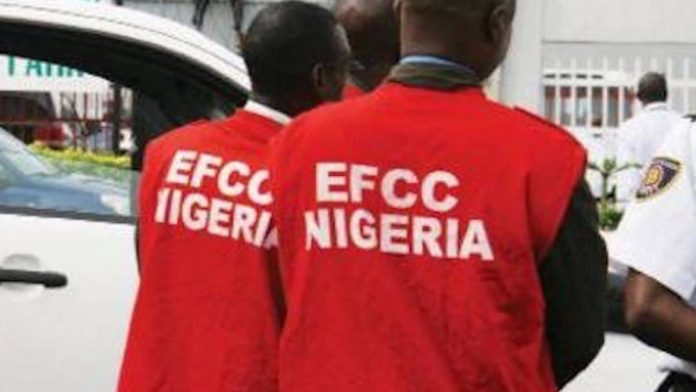 The Centre for Anti-Corruption and Open Leadership (CACOL) has commended the Economic and financial Crimes Commission (EFCC) for the arrest of the Accountant-General of the Federation, Ahmed Idris, and former Speaker of the House of Representatives, Patricia Etteh, for alleged fraud related offences.

CACOL in a statement by the Director of Administration and Programmes, Tola Oresanwo, on behalf of CACOL Chairman, Debo Adeniran, declared: “The arrest of the Accountant-General of the Federation, Ahmed Idris, and former Speaker of the House of Representatives, Rt, Hon. Patricia Etteh, for alleged fraud related offences is a welcome development”.

CACOL recalled that Ahmed Idris was alleged to have diverted and laundered N80 billion. According to EFCC, verified intelligence reports showed that Idris raked off the funds through bogus consultancies and other illegal activities using proxies, family members and close associates, CACOL said. It was also stated that the funds were laundered through real estate investments in Kano and in Abuja.

CACOL narrated that the former speaker, Rt. Hon. Patricia Etteh, was said to have received N130 million through her personal account from Phil Jin Project Limited, a firm which was awarded a N240 million contract by the NDDC in 2011. “Etteh, is neither a director nor the contractor, but investigation revealed that she was paid a total amount of N130 million by the contractor,” CACOL stated.

The Centre, therefore, declared: “It is very unfortunate that someone like the Accountant-General of the Federation can betray the trust reposed in him by the Nigerian state, through the very system that trained and supported him till he attained the pinnacle of his professional calling. It is more saddening to note that an exalted office he occupied is being looked upon by many upcoming Accountants and one would have thought he would be more conscientious and scrupulous in his official dealings knowing fully well that many of the younger generation are looking up to him as mentor. The money siphoned by the Accountant-General would have made considerable impact in settling the current impasse being experienced in our tertiary education system which has kept our children at home for some months now.

“For the Ex-Speaker of the House of Representatives, her case should serve as a lesson for those occupying various public offices today. They should know that they may be called upon to give account of their stewardship while in office many years after leaving the office.

“We at CACOL, therefore, commend the EFCC for taking actions against these two people. This is a very laudable and cheering development, considering the multiplier, and damaging effects of every strand of corruption perpetrated by public officials whom the country reposed so much trust in and the betrayal they used in repaying such trust. We hope the Anti-graft agency will not tarry in prosecuting them.”

The CACOL maintained: “The EFCC and other anti-Corruption agencies in Nigeria deserve the commendation and appreciation of all patriotic Nigerians for their resoluteness and doggedness in stamping out corruption from our land. The agencies deserve our cooperation to make them succeed in their mission of bequeathing a more sanitized and corruption-free social environment to all.”