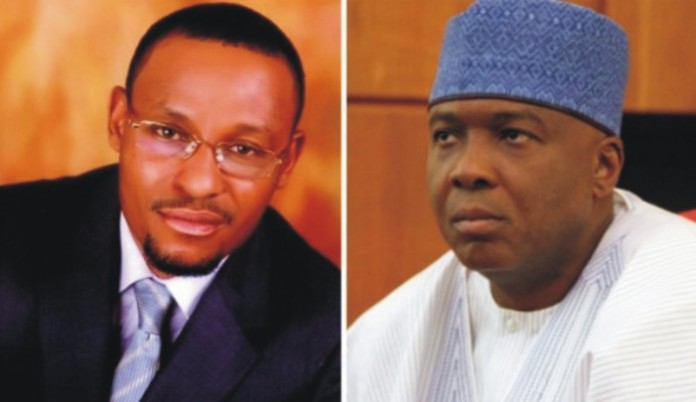 THE prosecution of the President of the Senate, Dr. Abubakar Bukola Saraki, at the Code of Conduct Tribunal (CCT) has been generating hazy intrigues in the past two weeks, giving rise to disquiets and suspicions from several elder statesmen over seeming politicization of the anti-corruption war.

The rigidity with which the CCT Chairman, Justice Danladi Umar, has been making and insisting on spontaneous enforcement of the rules of proceedings have also been raising skepticism as to the neutrality of the CCT Chairman in the trial.

All these intrigues are coming at a time that Saraki is beginning to open up on why he is going through seeming political persecution.

The CCT Chairman had about a fortnight ago declared that the prosecution of the Senate President will be on day-to-day hearing on the 13-count charge.

Justice Umar, relying on provisions of sections 376 and 315 of the Administration of Criminal Justice Act, ACJA, 2015, had ordered, “Let me state it here for both the prosecution and the defence that the trial of the defendant shall proceed on a day-to-day basis till the conclusion of this matter and it will begin from 10.00am to 6.00pm.”

Umar also added that the tribunal would on each day of the trial go on break at 1.00pm and 4.00pm.

Some supporters of the Senate president in the APC, who spoke to this reporter on condition of anonymity, alleged that “the day-to-day hearing of the case is a deliberate plot by the CCT chairman to lock out Saraki from attending legislative sessions in the Upper Chamber.” They contended that the order revealed the degree to which the trial has been compromised.

Saraki has from the first day of arraignment declared that he is being prosecuted simply because he is the Senate President, indicating that the CCT trial is a continuation of the political war in the All Progressives Congress (APC) over power tussle for the leadership of the Senate.

It was indicated that “the day-to-day trial order was coming on the heels of an intensified bid by the Senate to amend the Code of Conduct Bureau/Tribunal Act,” an action that has since been jettisoned by the lawmakers.

Moreover, the CCT Chairman was said to have ordered that senators should no longer accompany the Senate President to the tribunal, arguing that the trial of Saraki should not halt proceedings in the senate.

The Code of Conduct Bureau (CCB) had made a 13-count charge of false declaration of assets against Saraki.

Saraki was also accused, in the charges, of failing to declare some assets he acquired while in office as governor.

Other offences included purported acquisition of assets beyond his legal earnings; in addition to operating foreign accounts while being a public officer as governor and senator.

The charge contents indicated that these offences violated sections of the Fifth Schedule of the Constitution of the Federal Republic of Nigeria 1999, as amended.

Also, in the charges filed by M.S. Hassan, a deputy director in the office of the Attorney General of the Federation, Saraki was said to have breached Section 2 of the Code of Conduct Bureau and Tribunal Act and punishable under paragraph 9 of the said Fifth Schedule of the Constitution.

These charges are coming about five years after Saraki has completed his two terms tenure as Governor of Kwara State and also completed a four-year term as Senator of the Federal Republic.

The concerns are coming at a time of inconsistent and incoherent evidence presented by certain prosecution witnesses against the Senate President. These are in addition to the perceived unfriendly responses of the CCT chairman to certain aspects of the proceedings, which include refusing motions for adjournments.

The legal luminaries were said to have held a Conference on “The Code of Conduct enshrined in the Constitution of Nigeria and its crucial Importance in the fight against Corruption” in Lagos on March 24, 2016, whose communiqué was released last week.

They argued in the communiqué that it is not reasonable to be supposed or be expected that Mr. Danladi Umar can be impartial or unbiased in adjudicating the case between the Federal Republic of Nigeria (FRN) against Saraki.

“There can be no greater mockery of the whole notion of impartiality in any adjudicatory system than that Umar, with the threat of prosecution and removal from office for alleged corruption by the FRN hanging over his head, should have been allowed to adjudicate as presiding judge in the circumstances of this case,” they said.

They further stated that bias on the part of Umar seems to be clearly manifest in all the circumstances surrounding the case. According to them, the manner in which the trial is being conducted by Umar manifests also a certain overzealousness that suggests at least a real likelihood of bias on the part of Umar against Saraki or a lack of impartiality.

They had acknowledged the “unchallengeability of the judgement of the Supreme Court” in the jurisdiction case brought by Saraki delivered on February 5, 2016.

“The Code is, in its essential character, merely a body of rules designed to regulate the civil, not criminal, behaviour of public officers, much in the fashion of the Civil Service Rules.”

“The initiation of the criminal prosecution against Saraki before the CCT by a Deputy Director in the Federal Ministry of Justice at a time when there was no incumbent Attorney-General of the Federation (AGF) is invalid and incompetent in law,” the legal luminaries said.

They had, thereafter, advocated that Saraki should be given a fair hearing before a Court of Law where there would not be any likelihood of bias.

A mild drama, however, occurred at the CCT last Thursday when Umar refused to hear the motion filed by Saraki’s counsel on the CCT chairman’s alleged bias.
Umar had dismissed the application for his self-disqualification from the case, declaring:

“that motion as far as the tribunal is concerned, is of no consequence; not worthy to be entertained and is hereby thrown away.”

In an application filed by Raphael Oluyede, Saraki’s lawyer, the Senate President had requested Umar to disqualify himself from the case on the grounds that he was biased.
Saraki had at the weekend revealed that his refusal to support a Muslim/Muslim ticket for the APC in the 2015 presidential election is largely responsible for his ordeal at the CCT.
“But I have no problem with anybody. My concern was that it would not be politically smart of us to run with a Muslim-Muslim ticket. I doubt if we would have won the election if we had done this, especially after the PDP had successfully framed us a Muslim party,” he said.

From all indications, the odds are stacked against Sarakiwithin the ruling APC, the judiciary, especially, the bench, and the media, where he alleged come kind of crucifixion.
The Senate, however, said they will tough it out with him. That might be the reason Saraki is still hanging in there as Senate president.