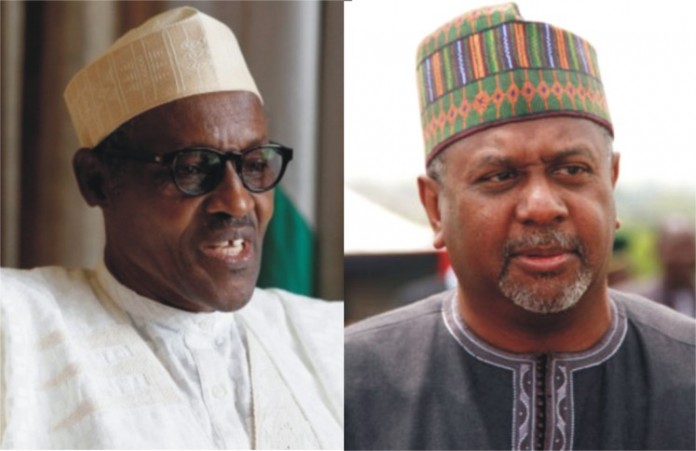 WITH two hours to air out and welcome relatives, including 95-year-old father, and lawyers Tuesdays and Thursdays, detained ex-NSA Sambo Dasuki will be grateful for small mercies from Justice Ademola Adeniyi of the Abuja Federal High Court.

But the little freedom his lawyers snatched on April 19, and Adeniyi’s dismissal of the federal government application to try the ex-NSA behind a closed door could mean a nightmare of sorts for President Muhammadu Buhari.

Some of his government’s loyalists may also start losing sleep over the $2.1 billion arms purchase scandal for which the retired colonel is facing trial.

“The reason Dasuki wants a public trial is because he has a lot of things to expose to Nigerians,” Abubakar Tsav, a former police commissioner public commentator, told the National Daily.

And, really, Dasuki is ready to split his gut. He already told Nigerians he gave Buhari two SUVs and $300,000 when Boko Haram’s suicide bombers attacked the APC presidential front runner in Kaduna in 2014.

That revelation got the presidency rattled, with the president’s media aides explaining the cars were his due as a former head of states.

“They were driven to his Kaduna office with message that the cars were from the federal government. No cash,” Femi Adesina said.

And sources confirmed to the National Daily that more heads will roll as the embattled ex-NSA reels out names of APC faithful and Buhari’s supporters who directly or indirectly shared in the largesse.

“The presidency is afraid now, and that’s why it insists on a controlled trial,” the source told the newspaper. The application was first made, to Adeniyi’s surprise, last September.
Dasuki is charged with illegal possession of firearms, local and foreign currencies (about $200,000) all traceable to the arms vote his office doled out to the PDP supporters in the lead-up to the 2015 general elections as authorised by former President Goodluck Jonathan seeking re-election then. He has spent about half a year in DSS detention.

ALSO SEE: Arms Deal Scandal: Metuh,78 companies and others got paid for doing nothing – Witness

At the beginning of his ordeal, Dasuki had hinted some of Buhari’s so-called saints aren’t exactly clean with regard to the arms purchase scandal.

While he hasn’t named anyone yet, a couple of APC chieftains were already embroiled. One of them was already defensive. Sen. President Bukola Saraki fired off a rebuttal some months ago, following Sahara Reporters’ investigation that alleged he got some hush money from the CBN printing and shipping about billions of naira for the PDP campaign then.

“Sahara Reporters learned that, as recently as May 2015, Mr. Saraki received N250 million from CBN officials,” the report stated. “The cash transfer was deemed part of the hush payment to ensure that Mr. Saraki keep quiet about the questionable withdrawals ostensibly meant for arms purchases.”

A CBN snitch loyal to the bank’s ex-governor, Sanusi Lamido Sanusi, was said to have informed Saraki, a senator then.

But Saraki, now Senate president facing corruption trial at the Code of Conduct Tribunal in Abuja, has dismissed the report as a smear campaign..

“As a member of the Seventh Senate, Dr. Saraki was not a member of any of the committees which have oversight function on the Ministry of Defence or the intelligence and national security apparatus,” Yusuph Olaniyonu, media adviser to Saraki, said in a press release after the online newspaper published its findings.

“If he was tagged the leader of the opposition to the Jonathan administration, how then will he be privy to arms purchases and have the influence to blackmail any government agency or institution over the release of funds?”

The other of Buhari’s buddies, Isa Jafaar, got N170 million from Dasuki. Jafaar is a long-time friend of the presidentfrom their days in the army to their political struggle in the ANPP, CPC, and APC. After fessing up to the EFCC, the retired general returned N1OO million of the loot, with a promise to pay up as soon as he was released.

Buhari and Jafaar might have explained away how the gift and the money came, but letting Dasuki loose before or during trial, many believe, could upset a lot of things for a government that wants to be seen as lily-white.

But Aso Rock will have to disregard the latest court order, as it has been doing, to keep Dasuki from chattering. It will be a tough task, however, because all the reasons served up for the secret trial seem hollow.

Earlier, the federal government was holding on to the horror Dasuki perpetrated in office as NSA. “”If you see the atrocities these people committed against this country, we can’t allow them to jump bail,” Buhari said during his first presidential media chat.

On other occasions, Dasuki was considered too a high security risk to let offthe reason the federal government has refused to release his travel documents.

Tsav sees some sense in that if the revelations he will make actually border on national security. “It will be in the interest of the nation to try him secretly for that reason. The trial of any NSA is security issue,” he said.

Prosecution counsel Shuaibu Labaran also feared for the witnesses. He went to court seeking an order to use pseudonyms to shield the names and addresses of all the witnesses (hooded) in any record or report of proceedings that may go public. He also wanted all the proceedings done in private rooms, with a handful of accredited journalists and lawyers allowed in.

But in all these, the courts, national or regional, have been upholding Dasuki’s fundamental rights. Justice Ademola has made more than three of such orders since last year. And he sees no reason for the government mystifying Nigerians about the trial.
The justice said there is no evidence to indicate that the life of any of the witnesses is threatened in any way, and Dasuki is not charged with terrorism.

The Abuja ECOWAS court, too, made it clear recently that the federal government cannot wall in Dasuki forever. “The objection of the government and the request that the case of the applicant in this matter be struck out on the ground of emanating from any criminal matter has no basis,” said Justice Friday Chijoke Nwoke.

According to him, the federal government’s claims and request lack merit. “They are hereby dismissed, and we declare that the application of Dasuki is admissible to this court.”

Some analysts, however, believe Buhari wants all the secrecy for a prime reason: to protect his predecessor Jonathan, The PDP candidate refused to make a fuss of his loss to the APC in the 2015 presidential election. And that meant a lot to Buhari who had spent 12 years angling for the top job in Nigeria’s government.

Many think the former president ought to have been interrogated by the EFCC if not for Buhari trying to pay back, After all the suspects in court so far, including Dasuki, claimed they were authorised by Jonathan to do what they did.

But since Dasuki, yearning for more freedom, is about to talk, and the court has killed the possibility of a secret trial, Buhari has got to manage his own headache.