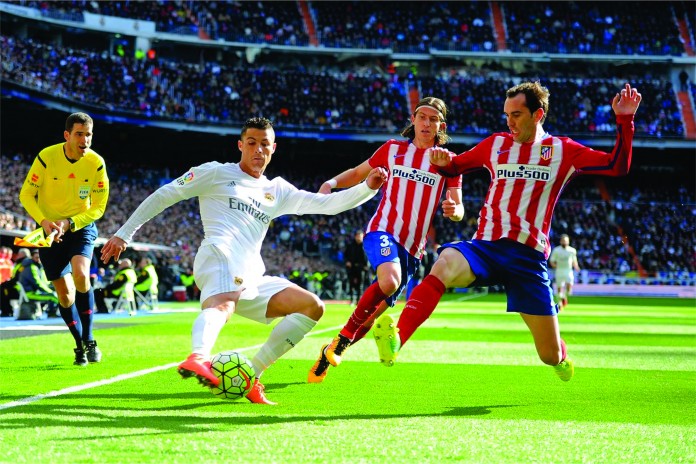 FROM a local derby to a high-powered managerial duel, a clash of styles to a revenge-packed rematch, this past Saturday’s Champions League final between Real and Atletico Madrid offered a bit of everything. Glam and glitzy as Real aimed for their 11th European crown, while down and dirty neighbours Atletico gunned for their very first. Before the final, Real scored 110 league goals this season; Atletico mustered only 63. But Real conceded 34, while their miserly opponents allowed just 18. So how did Atletico managed to be beaten?

A badass backline: The Rojiblancos’ backline has been breached on only 11 occasions in La Liga

A glance at Atletico’s list of results this season throws up an awful lot of zeros most of them in the opposition’s column. The Rojiblancos’ backline has been breached only 11 times in La Liga that’s a miserly 0.44 goals conceded per game and just three times in six Champions League encounters. They’ve also registered a remarkable 23 clean sheets in 37 matches in all competitions, and only let in more than one goal in four of their fixtures thus far.

Atletico’s defensive solidity is testament to organization and discipline as much as individual talent. Indeed, Diego Godin may be one of the best centre-halves in the world, Jose Gimenez one of the most promising and Jan Oblak a superb young goalkeeper, but Atleti’s resolve at the back is largely a result of the strength of their collective. A cohesive backline has made Atletico tough to beat

Simeone’s side’s ability to suffocate opponents with their energy, tenacity and constant pressure may not always make for the most entertaining spectacle, but it’s certainly effective in terms of shutting games down and denying even the most creative players space to thrive.

You have to score to win football matches, and against Atletico that’s far easier said than done.

Improved depth in attacking areas: Antoine Griezmann has developed into one of the best forwards in Europe over the last couple of years, with the France international hitting 19 goals in 34 appearances this term. It’s not all about locking the back door and chucking away the key, though. Atletico have some extremely talented attacking players in their ranks, with a number of options available to Simeone depending on the circumstances and task awaiting his side.

Antoine Griezmann has developed into one of the best forwards in Europe over the last couple of years, the France international having hit 19 goals in 34 appearances this term. Fernando Torres and Luciano Vietto one of the breakout stars of 2014/15 with Villarreal have had to wait patiently in reserve, while Koke, Yannick Ferreira Carrasco, Angel Correa and Oliver Torres have all weighed in with contributions of their own. Atleti have lined up in 4-4-2, 4-3-3 and 4-2-3-1 formations this year, with different systems opening up opportunities for different personnel. Having multiple options at their disposal can only work in their favour.

Maybe the world’s best manager: The modern era of the superclub has inevitably given rise to the ‘supermanager’, with Carlo Ancelotti, Pep Guardiola and Jose Mourinho beginning to rotate between the monied members of Europe’s elite every few seasons.

While Simeone’s loyalty to Atletico is such that he is likely to remain at the Vicente Calderon until 2017 at the earliest, his accomplishments as a manager to date are enough for him to already belong alongside the above names in the very highest bracket.

The best measure of any coach is whether and to what extent he is able to create a team that amounts to more than the sum of its parts, a test that the Argentine continues to pass with flying colours. In a tight Champions League tie that could go either way, the effervescent and dark-suited man on the touchline could make all the difference.

They love being underdogs: When Atletico won La Liga against all odds in 2013/14, they did so while averaging just 48.9% possession (by way of comparison, the equivalent figure for last season’s champions Barcelona was 59%). Atleti are most comfortable when they are able to cede possession and sit deep in a low block, before bursting forward with speed on the counter-attack as soon as the ball changes hands. And against Real Madrid on Saturday they were the underdogs.