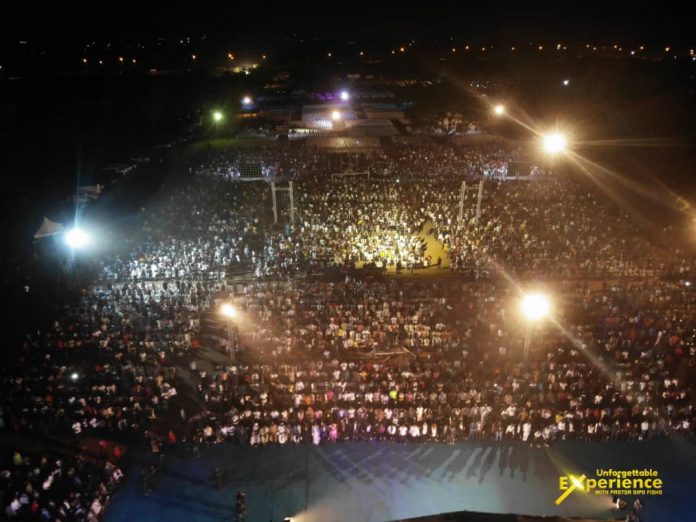 The Federal Capital Territory (FCT) Abuja will indeed not be the same again after the glorious
crusade held on Friday 29th March, 2019 by Christ Embassy Abuja Zone dubbed; Unforgettable
Experience Kubwa. The experience was indeed unforgettable as the exploits of that event are
still being narrated and retold by many, pointing to the huge impact the Zone has made within
the capital city of Abuja.
Describing the event, the Zonal Pastor Christ Embassy Abuja Zone, Dipo Fisho highlighted the
people centric focus of the programme thus, “the essence of the programme is people: to reach
people and win them to the kingdom through every available means as the ministry is driven by a
passion to see men and women all over the world come to the knowledge of the divine life made
available in Christ Jesus.”
Pastor Dipo was emphatic that the programme was orchestrated by the Holy Ghost Himself with
the aim of healing and impacting the city of Abuja and environs with the Gospel of Faith and
Grace and to banish evil from the land completely by pulling men and women away from the
destructive tendencies of the vagaries of life, into eternal life of peace, joy and prosperity.
This event according to members of the Church came at a very auspicious time, thus aptly
valuable, especially after a very contentious and highly divisive general election. The target of
the mobilisation strategy was focused on establishing stability in the land by plowing back the
minds of the people to focus on God, have their faith on Him alone and restore their confidence
and hope not in political office holders but in God.
Without doubt, there was no further confirmation that the programme was indeed orchestrated by
the Holy Ghost but from the manifested willingness of the brethren to go all hog with the Zonal
Pastor in their individual and collective support mirroring the words of scripture in Genesis 6: 11
“The people are united, and they all speak the same language. After this, nothing they set out to
do will be impossible to them.”
At the crusade proper, the stage was charged by the electric performance of the Christ Embassy
Abuja Zonal Choir which showcased their best electrified by the power of the Holy Ghost.
World class music ministers including Obi Shine, Chris Sharon, Joe Praiz amongst other
outstanding ministers of the word in music, were terrific in their individual ministrations. The
music ministration was crowned by the brother that has the spirit of David.
The Kubwa Crusade was indeed a celebration of the Word of God and the manifestation of the
Spirit of His power in all ramifications. It was indeed a night of excitement and miracles as every
individual in the arena experienced the demonstration of the power of God in manners that
would remain unforgettable in their lives. But more importantly, the high number of people who
received salvation was testimonial that the programme was indeed for the people as Pastor Dipo earlier mentioned. During the call for salvation, over 1000 souls got saved as they willingly
obeyed the altar call and came out to receive Jesus Christ as their Lord and personal savior.
From every indication, The Unforgetable Experience Kubwa was indeed a stirring of the waters.
The healing miracles were incontrovertibly outstanding. Diverse illnesses including terminal and
debilitating ones were healed by the power of His presence at the arena. The remarkable thing
about the scores of the outstanding healing miracles recorded live at the event was that all the
cases pronounced by the Zonal Pastor as he prayed for the sick, had tens of people come out as
recipient witnesses to testify of receiving their healings as the pastor prayed.
The outcomes of the Unforgettable Experience Kubwa, clearly captures the words of the
President of Believers Loveworld Incorporated, Rev. Chris Oyakhilome, that being in Christ
Embassy is more than being in a church: it’s a vision, God’s vision.