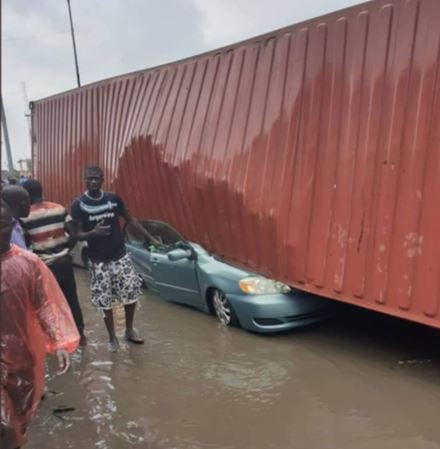 An articulated truck carrying a container lost balance, and tilted the  container of on two cars in the Apapa Wharf  area of Lagos on Saturday.

But miraculously,  there was no report of casualties.  The car occupants escaped.

President Muhammadu Buhari had on May 22 ordered the immediate removal of all trucks from the bridges and roads within Apapa within 2 weeks.

The directive followed an emergency meeting convened by Buhari and chaired by Vice President Yemi Osinbajo on the 25th of April, 2019.

But the accident which occurred on Saturday was an indication that Mr President’s directive appeared not to be implemented.

Another twitter user @tholuinspire said “Thank God for saving the owners of these two cars at Apapa today. This container fell on the cars but no one was inside the car.”