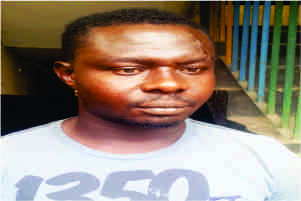 The duo of Suraj Ramon and Ahmed Ademola have been remanded in prison following the killing of one Agboola Joseph at Shomolu during a cult clash.
‪Two suspected cult members who are members of the Eiye confraternity had a clash with Aiye group on November 29, at Shomolu canal have been remanded in prison custody over alleged murder of one Agboola Joseph, (35) a carpenter at Chief Magistrate’s Court, Ebute-Metta in Lagos
The court presided over by Mr. Nurudeen Layeni, ordered the remand of the two suspects, Suraj Ramon, (33) and Ahmed Ademola, (24), following an application for their remand by the detectives from the Criminal Investigation and Intelligence Department of Lagos State Police Command, Panti-Yaba.

‪The detectives in the remand application which was pursuant to Section 264(1) of the Administration of Criminal Justice of LaGuardia state, 2011, alleged that the two suspects and others now at large, who managed and belonged to an unlawful society named ‘Eiye Fraternity’, had on December 1, shot the deceased to death with a gun.

‪They were alleged to have committed the act at Bajulaiye Canal area of Shomolu.
‪The suspects lawyers led By Mr. Spourgeon Ataene, while urging on Section 264 (1)(2)(3)(4)(5),urged court to admit them bail pending the out of an advice from the office of Director of Public Prosecution, DPP.

‪The prosecutor, Mrs. Matthew A., urged the court to discountenance the submission of the accused persons’ lawyers, saying that what was before the court was remand application.

However, the magistrate, Mr. Layeni while ordering the remand of the two suspects in prisons custody, said his court has no jurisdiction to entertain the case which bordered on capital offence. Adding that it is only DPP can issue advice on the matter.

‪He consequently ordered that the two suspects be remanded in prisons custody while adjourned the matter till January 25, 2016.