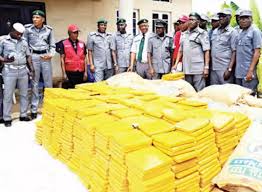 The Ogun Area 1 Command of the Nigeria Customs Service (NCS) has seized 710 parcels of Indian hemp illegally smuggled into the country from Ghana.

Apart from the hemp, which was packaged in coconut size wrap with a street value of N25 million, the Command also seized 2,251 bags of 50kg rice, 36 vehicles and 1.4 million litres of premium motor spirit (petrol) among others.

The value of the total seizure was put at N667.8 million.

Addressing newsmen at Idiroko recently, Controller of the Command, Comptroller Michael Agbara, said the Indian hemp concealed in a built-in- compartment of a truck was intercepted along Ihunbo axis in Ogun State following a tip-off.

According to him, no arrest was made in connection with the seizure as the driver of the truck fled on sighting the officers and abandoned the vehicle.

“We have 710 parcels of Indian hemp concealed in the vehicle. The smugglers reconstructed the vehicle in such a way that if you see it, you will think it is empty but on a closer look, you will know that there are two compartments and inside the compartment, we have the Indian hemp. The street value of each is N30,000 and based on that value, the total street value is over N25 million.

“The vehicle was arrested through intelligence and immediately the driver cited our officers, he jumped out of the vehicle,” he said.

Agbara, who frowned at the high spate at which youth were taking Indian hemp, said the use of such substances was responsible for the high rate of crime in the country.

“We see the implication of this drug on Nigerians with a lot of of youth restiveness, banditry in the country. The youths cannot commit this kind of crime without taking something. So if we are depriving them of these hard drugs, we are helping the country. It is part of our duty of protecting the country. We are after a saner Nigeria, not just generating revenue,” he said.

He said the command is collaborating with the National Drug Law Enforcement Agency (NDLEA) to ensure that those behind the importation of the smuggled hard drugs are prosecuted.

Meanwhile, Comptroller Agbara has commiserated with the family of Opeyemi Adeshina, the high school student who lost his life and others who were hospitalized after a customs vehicle rammed over them while conveying a seize tokunbo vehicle.

“What happened was purely an accident. Only one pupil died and we sympathize with the family of the deceased. Customs is a responsible organization. Our anti-smuggling drive is for the good of the people and the economy, not to kill anyone. We are in touch with the family and traditional rulers of Ihumbo community where the accident took place,” he added.

Share this on WhatsApp
Related Topics:GhanaIndian HempNigeria Customs Service (NCS)
Up Next