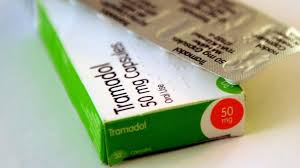 Share this on WhatsApp
By Richards Adeniyi
The Tin Can Island Command of the Nigeria Customs Service (NCS) recently confirmed the seizure of two containers of Tramadol imported from India.
Customs Area Controller, Comptroller Musa Abdulahi, during a hand-over ceremony to the National Drug Law Enforcement Agency (NAFDAC) disclosed that the products were declared as electrical static converters and ciprofloxacin in a bid to evade arrest.
Abdullahi expressed concern that despite efforts to discourage importation of illicit drugs, some unrepentant elements still engage in such practice.
“One by 40 and 2 by 20 containers of Tramadol Hydrochloride 225mg which were declared electrical static converters and ciprofloxacin. We are collaborating with NAFDAC and NDLEA on this seizure.”
He added that a suspect in connection with the containers was arrested by the Command, while the search for those behind the import continues.
He told newsmen, “We have gotten a suspect who is the agent and through him, we will get the importer and ensure they are prosecuted and thereafter the consignment will be destroyed.
“Those who are involved in this thing should stop because it is dangerous to our health. It is addictive and it can kill. We have to stand out against this. Just as the Federal Government has banned codeine, we expect this will happen to this drug quickly.
“The import is coming from India and for export only. I think the government can explore the diplomatic way with the Indian Government by trying to see how we can prevent the importation of this type of dangerous drugs into the country”.
The Controller also disclosed that three other containers of e-waste regarded as unhealthy to the environment were also intercepted.
Also seized were five containers of second-hand clothes and one container of used tyres which duty paid value was put at N124m.
The controller disclosed that there was an improvement in the revenue generation from the Command during the first quarter of this year.
The Command generated the sum of N104.5 bn in the first quarter of this year as against the sum of N82.154 bn during the same period last year, an improvement of N N22.68 bn.