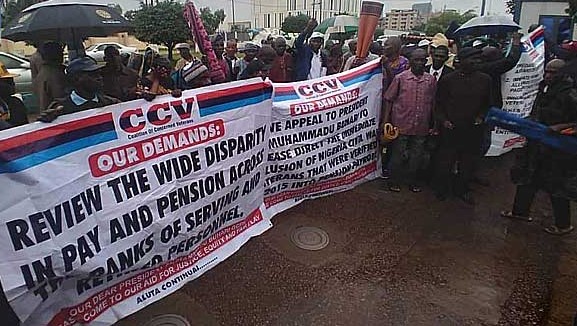 Some protesting military veterans have accused the Minister of Defence, Maj.-Gen. Bashir Magashi (Retd), of being insensitive to their plight.

The protesters who are members of two groups— the Retired Members of Nigerian Armed Forces (RMNAF) and the Coalition of Concerned Veterans (CVV)—picketed the access road the defence ministry in Abuja, and vowed to stay put until the minister meets their demand.

The spokesman of the CVV, Abiodun Durowaiye-Herberts, said they already made arrangement to sleep overnight.

“We are here alongside our wives and children, and the widows of fallen military personnel and veterans who died in service, some of whom died fighting Boko Haram terrorists,” he said.

The National Secretary of RMNAF, Roy Okhidievbie, said the demonstration was to demand the payment of their security debarment allowance the federal government owed them.

“We have had meetings with the Defence Minister, Magashi, but he appears to be headstrong, heartless, and unperturbed concerning the grievances of retired military officers, as he never paid nor showed any interest or concern to pay these allowances, especially the Security Debarment Allowance.”

“Interestingly, President Buhari-led administration has approved the payment of this allowance, but Magashi have refused to make disbursements,” Okhidievbie said.