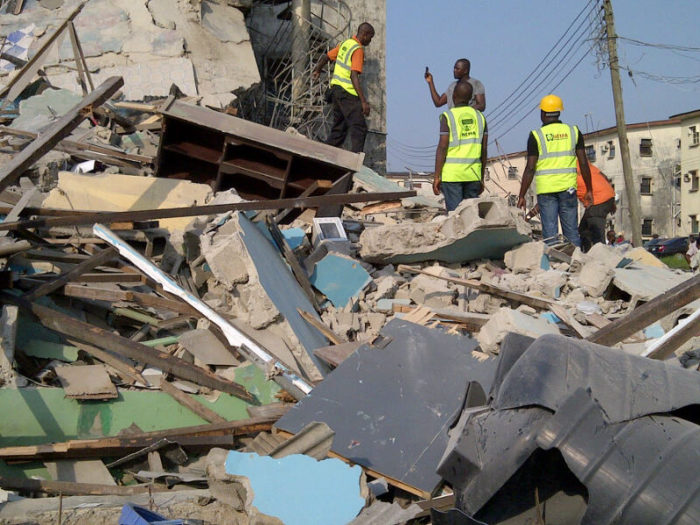 Share this on WhatsApp
Spread the love
The developers of the Three Floor storey building which collapsed in Ilasamaja on Thursday criminally unsealed a stop work order on the building and continued construction before eventual collapse, the Lagos State Government has said.
Speaking to journalists after an on the spot assessment of the collapsed site, the Commissioner for Physical Planning and Urban Development, Tpl. Wasiu Anifowose, said the building in question was disapproved by officials of the Lagos State Building Control Agency (LASBCA), but the developers illegally broke the seal to continue work.
Anifowose said officers in charge of that area had two weeks before the collapse disapproved the development because it was being built contrary to building regulations.
“This particular building had been monitored and had been sealed off. Our officers had come back to monitor for compliance but they were prevented by hoodlums from carrying out their statutory responsibilities
“Yesterday, before the collapse, our officials were there again but were chased back to the office to reinforce when this tragedy happened.
“We had actually served all the necessary statutory stop work notices and this is evident in our records that the building was sealed off but this developer broke the seal twice and continued with the illegal development and this is the result of the illegality,” the Commissioner said.
He added that building had been sealed off on account of the evidence that the materials found on site were substandard, aside the fact that the developers had no development permit to embark on the construction.
ALSO SEE: Collapsed building: 3 dead, 19 rescued by NEMA
Anifowose said the State Government was unhappy with the rate of illegal developments within the State, adding: “Despite deploying officers to monitor development to prevent such ugly occurrences, some wicked, irresponsible and unscrupulous developers still carryout nefarious illegality.
“Once a building is sealed off, the seal should not be broken. It is dangerous and is a criminal
offence punishable under the building control law,” he said.
Already, Anifowose said the State Government has swung into full investigation of the matter and would not hesitate to employ the full weight of the law to deal decisively with any unscrupulous developer who violates the law.
He, however, enjoined all property owners and developers to employ the services of qualified professionals before embarking on any form of development in the State.
Share this on WhatsApp
Related Topics:Collapse BuildingLagos State Building Control Agency (LASBCA)Lagos State Government
Up Next