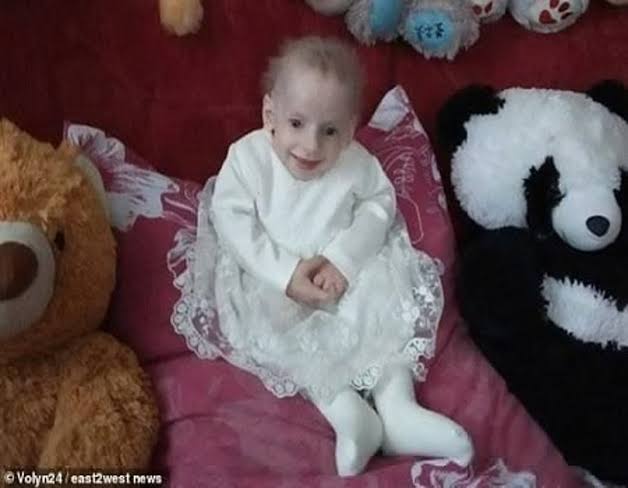 A girl aged eight has died of old age in Ukraine after suffering from an exceptionally rare genetic progeria disease which only affects 160 people in the entire world.

Anna Sakidon’s biological age was nearer to 80, said medics as they paid tribute to a ‘wonderful’ girl who had to battle so many health problems.

The child reached her eighth birthday last month but only weighed 17lbs.

She died from multiple failure of her inner organs linked to her premature ageing condition, said reports in Ukraine.

Her grieving mother Ivanna had told earlier how she was “ready to sacrifice everything in order to make her daughter healthy.”

Timofey Nagorny, head of the Foundation of Ukrainian Volunteers which supported Anna Sakidon’s medical treatment, had said: ‘Her only dream is to discover one day that the diagnosis of the doctors was wrong.’

“For children with progeria diagnosis one year is equal to eight-to-ten years, so her real age was between 70 and 80.

“The child suffered from early ageing of her inner organs and body system.

“Her bones grew slowly while her organs aged rapidly. Such patients usually die from strokes. Anna suffered several strokes, and paralysis of her limbs.”

This affected the movement of her arms and legs.

She had been diagnosed with Hutchinson-Gilford progeria syndrome, a genetic condition, soon after birth.

In a video when she was three, her mother showed Anna to the world and told she could walk well from the age of ten months. By 11 months she followed her mother everywhere but was scared of light so could only go outside in the evening.

At the age of three, she was happy to hug and kiss her teddy bear but didn’t like kissing people.

Research in The Netherlands indicated that the condition affects one in 20million births.

There are only around 160 known sufferers in the world.