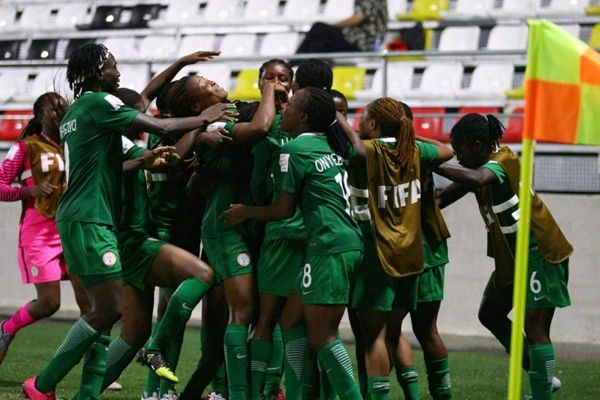 Share this on WhatsApp
Spread the love
The delegation of U17 women national football team, Flamingos, will on Friday arrive in Yaounde, capital of Cameroon for their final round, final leg of the 2018 FIFA U17 Women’s World Cup qualifying fixture against their Cameroonian counterparts, National Daily learnt.
The team will fly aboard an Asky airplane from Abuja for the game billed for Sunday.
Both teams ended the first leg, played at the Samuel Ogbemudia Stadium, Benin City penultimate weekend, 2-2 and the tie is delicately balanced considering Nigeria’s pedigree in women football in the continent.
The Flamingos dominated the first leg encounter but were unlucky not to win, and will look to shock the Cameroonians in their own backyard on Sunday evening.
Precious Vincent and Osaretin Ikekhua got the goals for Nigeria in Benin City. However, Coach Bala Nikyu says many more of his outfield players are capable of putting the ball in the net when the die is cast in Cameroon.
Nigeria has never failed to qualify for the FIFA U17 Women’s World Cup. The Flamingos were part of the inaugural party in New Zealand in 2008, and also featured at the 2010 (Trinidad and Tobago), 2012 (Azerbaijan), 2014 (Costa Rica) and 2016 (Jordan) editions. Nikyu coached the team at the two last editions of the FIFA World Cup.
Share this on WhatsApp
Related Topics:2018 FIFA U17 Women’sFalconetsYaoundé
Up Next