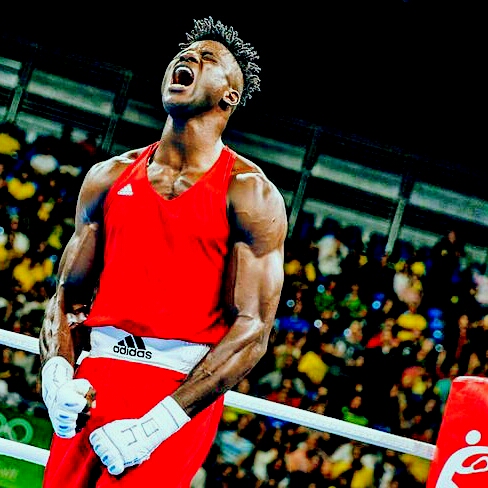 In 2016 he won the gold medal in the super heavyweight event at the African Boxing Olympic Qualification Tournament held in Yaoundé, Cameroon. By doing so, he qualified to represent Nigeria at the Rio 2016 Olympics. Nigeria’s sole boxer to Rio, Efe Ajagba spoke recently with National daily Esther Egbe about the game and his trip to America for betterment of his fight.

Who is Efe Ajagba?

What influence you into boxing?

When can you say was your most memorable fight?

African championship and Olympic that my most memorable fight

What are the challenge as a boxer?

I ‘m turning to a professional boxer now.I want to become world champion in my boxing career.

How long have you into boxing?

I started boxing November 2011,its not easy ,but because I want to represent my country.

Who are your mentors in boxing?

My mentors are Lennox Lewis and wladimir kiltscko.

What is your desire for Nigeria Boxing Federation?

I don’t want to say anything about Nigeria boxing federation.

Do you monitor what is happening in the boxing world?

Yes,I do love to watching other people fight.

What should your fans expect in your next game?

I want to use this opportunity to my fans for wish me the very best luck and boxing is over yet. I want to become world champion for my fans and that’s my promise

When you become world champion,what will you do for the society?

I want to change Nigeria boxing society.To make young youths to be better than me.

What is the fight in August about?

How does it feel to be the only boxer that went to Rio to represent Nigeria last year?

Why did you choose to go into boxing and not any other sports?

I actually started sports by playing football when I was in secondary school but I discovered that it was not the best for me as it would not give me the opportunity to stand out and there was no income. I was playing in a football club in Delta state at the time when a guy in my area challenged me to a fight. The guy was bigger and looked heavier than me and people thought I would be floored but I brought him down with just a punch.

That was when friends encouraged me to take up boxing but at that time, I did not think boxing was for me. A couple of years later, I just decided not to continue in football. That day, I went to the stadium at Ughelli, to look for a boxing coach; that was in November 2011. Though I started training in boxing, I did not leave football completely. However, I got into boxing fully after I won silver at the National Sports Festival. That was when the national coaches saw me and invited me to join the national team to represent Nigeria at the Commonwealth Games in Glasgow.
.
What was your family’s reaction to your choice of boxing?

My father was Ajagba Samuel and he used to be a boxer. Though he was a good boxer, he did not

What was your family’s reaction to your choice of boxing?

My father was Ajagba Samuel and he used to be a boxer. Though he was a good boxer, he did not gain income from it but he encouraged me after I told him I wanted to get involved in boxing. He told me I had the physical strength to be in the profession and that encouraged me to continue. Right now, they are very happy with my progress so far. I have always won medals in any competition I participate and they appreciate that. My dad is so happy about that. 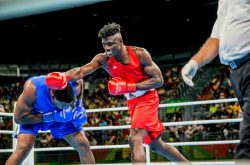 Which boxers challenge you the most?

Countries like Azerbaijan, Kazakhstan, Cuba and England. They have countries with very good boxers especially Toni and from England are very tough and I think I am the only one that can give them a tough time. I have the talent and i have the power to overcome them.

What is your target in August?

I want to win coming August this year. I can confidently say Ajagba will make history and bring home a medal. I will surprise the world .

Do you have target for every competition you prepare for?

In every competition I have gone, I have always won something, In 2016 I won the gold medal in the super heavyweight event at the African Boxing Olympic Qualification Tournament held in Yaoundé, Cameroon. By doing so I qualified to represent Nigeria at the 2016 Summer Olympics.

At the at the 2014 Commonwealth Games held in Glasgow, I won Bronze even though I was robbed of getting into the finals at the 2015 African Games held in Brazzaville, Republic of the Congo I won gold. The records are there for all to see. 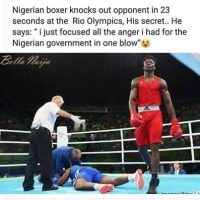 What have you learnt so far as a boxer?

I have learnt so many boxers potential to added to my skills.

How old are you and where do you want to see your self in the next three years?

I am twenty three years old.I want see myself as a world champion next three years.
One thing you will love to change in Nigeria boxing?

What do think about Anthony Joshua as a boxer ?

Anthony Joshua is a tough,strong,full of energy. He is good at the ring.

Have you ever felt bad when you lose a fight?
Yes, I always feel terrible, each time I lose any fight.After I lose then I will go back to my training to put more strength.

What is your best meal as a boxer?

You travelled recently to America with the captain of Nigeria boxing?
Yes, I travelled with Efetobor Apochi,Nigeria heavyweight boxing champions they just signed both of us.

Why did you go for your pro training in America?
American is a great place for me to become world champion next three years.Houston Texas with my coach Roland shields,the gym name is plex.

Would you love to work with Anthony Joshua in future ?
No, I don’t think I will love to.

Do you drink alcohol? how do you relax?
I don’t drink alcohol and I stop drinking alcohol when started boxing career.i love to rest alot and sleep too.

What kind of woman will you like to marry?

A faithful woman with Good heart. I will love to marry from my country.

Why didn’t you win any medal at Rio 2016?
I missed it,I felt really bad about that Olympic game for not making Nigeria proud.