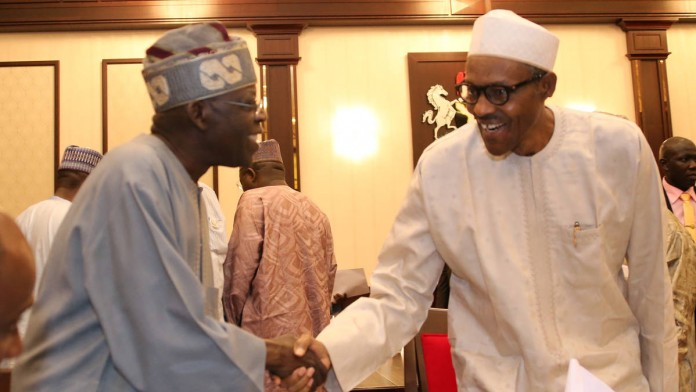 Share this on WhatsApp
Spread the love
President Muhammadu Buhari has put machineries in motion to urgently mend seeming broken fences with Asiwaju Bola Ahmed Tinubu, a renowned celebrated national leader of the All Progressives Congress (APC), National Daily authoritatively reports.
An aide of the former Governor of Lagos State revealed that the reconciliation initiative commenced at the wedding of the daughter of the president where prominent APC leaders and notable government officials were in attendance.
At the preliminary discussions between the President and Tinubu, a meeting was scheduled for January 15, 2017, at the Presidential Villa, Abuja, where the duo will deliberate on the details of their further working together after seasons of reports of purported disenchantment and perceived exclusion of Tinubu from the scheme of influence in both the APC and the Federal government controlled by the party.
National Daily was reliably informed that President Buhari will also put on the table slots of ministerial nominations reserved for Tinubu to be included in the federal cabinet in view of the plan to dissolve or reshuffle the current Federal Executive Council (FEC) as part of the bargaining chips to woo Tinubu back to the APC fold.
It is not clear what the game plan is; and Tinubu’s loyalists said they are still studying the initiative. They expressed suspicion of two missions in the reconciliation proposal.
“Either the President is working towards contesting for re-election in 2019 or, probably, intends to share the failure of the party-government with APC leaders,” one of the loyalists told National Daily.
Meanwhile, Tinubu is expected back to the country between now and next week.
National Daily is closely monitoring the arrangements and will unveil further details.
Share this on WhatsApp 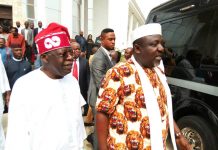 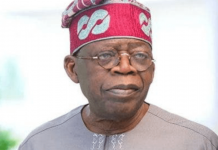