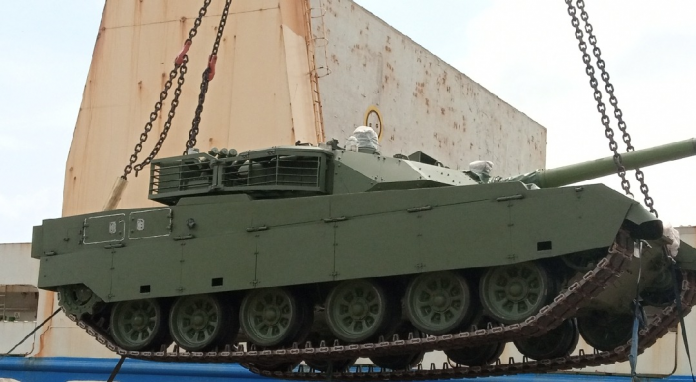 The Chief of Policy and Plans, Nigerian Army, Lt Gen Lamidi Adeosun, on Wednesday said in Lagos that the acquisition of several armoured tanks and artillery guns by the federal government through the Ministry of Defence was to enable the Force deal with insecurity in the country.

Taking delivery of the equipment at the Nigerian Wharf, Apapa, Adeosun said the acquisition would enable the army have a more robust operations against the terrorists and put behind us the menace of insecurities – bandits, kidnappings and other organised crimes.

It was learnt that the armoured vehicles consisting of heavy and light tanks as well as sundry artillery guns, spare parts and accessories were procured from the Republic of China and they are the “latest technology in tank and artillery armaments.”

Gen Adeosun, who was accompanied by the General Officer Commanding (GOC), 81 Division, Maj Gen Olu Irefin and other senior officers, explained that “we are here to witness the reception of the armaments the government of Nigeria through the Ministry of Defence has procured for the Nigerian Army.

“The process of acquisition has been on for some time and they are coming in as at today. This is to show how serious the Federal government is, and making sure that the Nigerian army is not only equipped as necessary but to ensure that insecurity problems we are having in the country are tackled with trained personnel and required equipment.

Pointing out that this was a “tip of the iceberg,” he noted that among the series of armaments being expected, “this was the first batch. Others are coming. This is an indication that the military and government are very serious to tackle the security problems across the country.”

To effectively deplore the tanks and maned by well-trained personnel, the Chief of Policy and Plans, Lt Gen Adeosun added that the Force wasn’t lacking trained personnel as “those who will operate them have been trained in China” noting that if not because of the Covid-19 that is ravaging everywhere, “we suppose to have some trainers here to train more of our personnel, he reiterated.

About 17 of the tanks and artillery guns have been offloaded from the ship and more are still be offloaded. However, It was gathered that the Federal government spent several millions of dollars for the procurement of the brand new armaments.