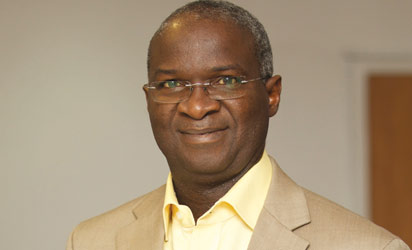 THE minister of Power, Works and Housing, Babatunde Fashola, has said the federal government will not be able to provide funds to subsidise solar power projects and consumption of its outputs, estimated to cost N3 billion monthly.

The minister who met with about 14 solar power promoters in Nigeria in a renewed effort to clear challenges militating against investment in and use of solar power in the country, said about N3 billion has been calculated as the possible monthly fund the government would have to pay to subsidise solar power consumption in the country.

Fashola informed the solar power promoters that irrespective of government’s appreciation of their unique challenges, it was not considering paying out such huge sum monthly for consumption of power generated from their solar plants.

Instead, the minister advised the investors to consider securing bulk electricity consumers whom they can sell their outputs to at prices that would guarantee them return on their investments.

The minister explained to journalists in Abuja that the vendors have ongoing projects in various parts of the country which are held back from achieving financial closure due to such challenges like tariff and tax rates, adding that the essence of the meeting was to find ways to solve some of the challenges identified by them.

He said, “Solar is one of the options for incremental power in line with our road map for the sector from incremental, to steady to uninterrupted power. So, we are working our talk and we are looking at every place we can to get energy.”

He explained that solar has not been focused on by government as a major energy mix because solar power comes at a cost which is more expensive than gas powered plants at today’s market prices in Nigeria.

Speaking further, he said: “The good thing about solar is that the price seldom never goes up, it stays fixed or comes down but the entry market price now is 17 cents per kwh and if multiplied at N200, it is about N34 which is much more expensive than the current gas and other tariff.