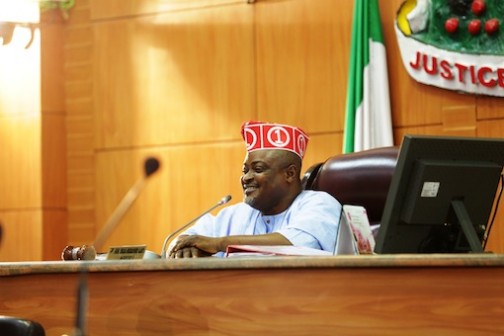 The Lagos State House of Assembly has counseled the Federal Government to converse the Niger Delta Avengers (NDA) to proffer a lasting solution to recurring oil pipeline vandalization in the region.

This becomes the resolution of the House after taking the report of the Chairman House Committee on the Environment,Hon. Saka Fafunmi over scarcity of water in the State.

The House had last week directed the committee to invite the Managing Director of the State water corporation to brief the House on why there had been water shortage in some parts of the State.

In his report, Fafunmi maintained that the activities of Niger Delta Avengers who have been vandalizing oil facilities which consequently amounts to near zero cut of power supply was also responsible for the water scarcity.

“The House urges the Federal Government to come to a roundtable table discussion with the militants towards finding a lasting solution to the crisis,” he said.

Meanwhile the Speaker, Mudashiru Obasa has congratulated Nigerian Muslim faithful as they joined other world Muslims to commence Ramadan fast.

Obasa made this remark shortly after the House Committee Chairman on Home Affairs, Olayiwola Sabur gave his Personal Explanation over the commencement of the fast.

Obasa stated that Ramadan commenced yesterday 6th June after the sighting of the crescent and it was expected that the fasting should last for 29 or 30 days.

“We are all urged to share part of our belongings; we should give more alms to the less privileged. Extend hands of fellowship. We believe the fast shall usher in a new beginning and then we will be born again at the end of the fast,” Obasa said.