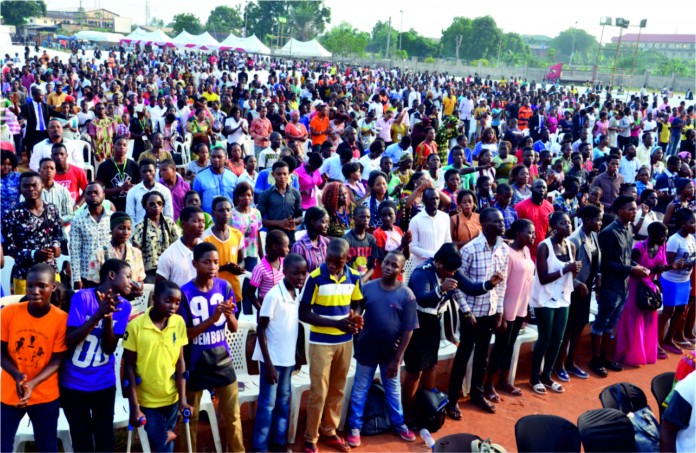 IT was an awesome experience in the Royal City of Benin, Edo State, Nigeria, and the epic event wasn’t a political rally of some sort, even as the Mid-Western state bubbles toward its next gubernatorial elections but a religious gathering.

The event was the Total Experience with Pastor Mary Owase. The program, which held at Eghosa Grammar School Grounds, along the Benin-Lagos expressway witnessed over several thousands in attendance. Large multitudes of people had already begun pouring into the arena from as early as 12noon for an event that was scheduled to commence by 3pm. They came to witness the awesome manifestation of God’s word and to enjoy a unique fellowship with the Spirit of God.

With rapturous excitement, the crowd anticipated the moments defying the scorching heat from the sun, which blasted at above 34 degrees Celcius. Their expectations were met as the event kicked off with exhilarating music ministrations and an electrifying praise session, led by Emmanuel and the CE Benin Zone 3 Mass Choir, who were decked in celestial candor and glittery robes, accompanied by a host of inspiring ministers. Song after song, the people danced, cheered and expressed themselves freely to the Lord, glorifying His name and thus setting the momentum for more that was yet to come on that night.

There were special testimony segments, featuring brethren who gave remarkable accounts of the transformative power of God’s word in their lives, which they had experienced and witnessed in Pastor Mary’s meetings.

A Night of Lifting Worship and Music Rendezvous

The night also featured beautiful renditions from a crop of the LoveWorld Music & Arts Ministry (LMAM) international multiple award-winning music artistes, Samsung, TB1, Frank Edwards and the worship sensation, Eben, as they led the congregation in sessions of inspiring music, praise and worship. Sharing his personal testimony with the crowd, Frank Edwards inspired the congregation to open their hearts to receive the word from the woman of God, reiterating its inherent ability to transform their lives; “Many years ago, we came to Pastor Chris as nothing but look at us today,” he declared.

The Gospel of Christ in its Simplicity

The entrance of the woman of God, the Zonal Pastor of Christ Embassy Benin Zone 3, Pastor Mary Owase, was greeted with resounding acclamation. As she stepped in, she declared healing upon the crowd. Her words: “There is so much of God’s presence and glory in this place here today.”

In a short but very inspiring message, Pastor Mary explained from the book of John 10:10 God’s eternal love for mankind and His plan for man to enjoy life in its fullness – in all aspects of human life and to live perpetually in dominion and victory.

The Zoe Life in Its Fullness

The woman of God enlightened the congregation on the uniqueness of the God-kind of life. “We bring you news from the kingdom of God; there is a life that has been delivered to us and this life came through Jesus Christ. Totality is in Christ, and there’s no other place you can get it.” She emphasized the life in Christ as one characterized with purpose, garnished with power and filled with plenty and abundance.

Fulfilling Your Divine Destiny in God

Taking the congregation into deeper realities, she exposed the destinies of man, highlighting the differences between the natural and divine destinies. “The divine destiny of a man is God’s plan and purpose for a man’s life; it’s the course of events, structured by God in a way that brings glory to God,” the cleric said.

Leaning on the biblical stories of Moses, Jacob and Saul and their encounters with the Spirit of God, she said, “The divine destiny for a man doesn’t start until you come in contact with Jesus Christ. The natural destiny of a man cannot take you far; it cannot help you fulfill God’s desire for your life.”

She discussed the glory of God and its essence in the destiny of a man. The woman of God explained that, “the glory of God is health in a man; its riches in a man; it’s you becoming a success; it’s the expression of the love of the Father through you… and there’s no life without you living in the glory of God, irrespective of your success and fame. You may be a success on your job, you may be a successful student, an inventor, but without Jesus it’s all empty.” According to her, Christ in you is your hope of health, success and strength for the beautiful life you desire.

The Kingdom of God In A Man

Reading from Luke 17:21, Pastor Mary declared that the Kingdom of God is the reign of God — it’s the place where God rules and expresses His glory and goodness — and it exist within you, when you accept the divine life of God. This is what makes your story different irrespective of the prevailing circumstances around you. You must understand that humanity is God’s first-class citizen and the crowning glory of all His creation; needless to say, man was designed to live in victory, excellence and completeness. The only limitation is that many don’t know and have not come into it.

The Gift of Salvation, and Miracles Everywhere

With the entire auditorium already saturated with the presence of God, over 500 persons responded to the altar call, accepting Jesus Christ into their lives. The entire auditorium erupted as the testimonies came rolling in; there was the unique case of a young man who was deaf in his left ear for two years and suffered low abdominal back pains but was healed instantly during the meeting.

Notable also was the story of an elderly woman who was discharged from the hospital as medical science had proved futile on her case. She was brought into the meeting bedridden and could not even sit upright but was healed and began walking during the meeting.

Asthmatic conditions dematerialized, as chronic back pains, ulcers, and heart conditions disappeared to the glory of God. Testimony after testimony, the people danced and celebrated the power of God as Gospel artiste, Eben, led the congregation in rapturous worship. The woman of God blessed the city, praying specially for its government and people.

The night came to a crescendo with a time of celebration as the LoveWorld Music All-Stars took the main stage, serenading the atmosphere with songs of victory and praise. Indeed it was a unique and total experience for everyone who attended, a testament to the fact that Jesus still pulls the largest crowds today, and He is still very relevant in our evidently troubled world.