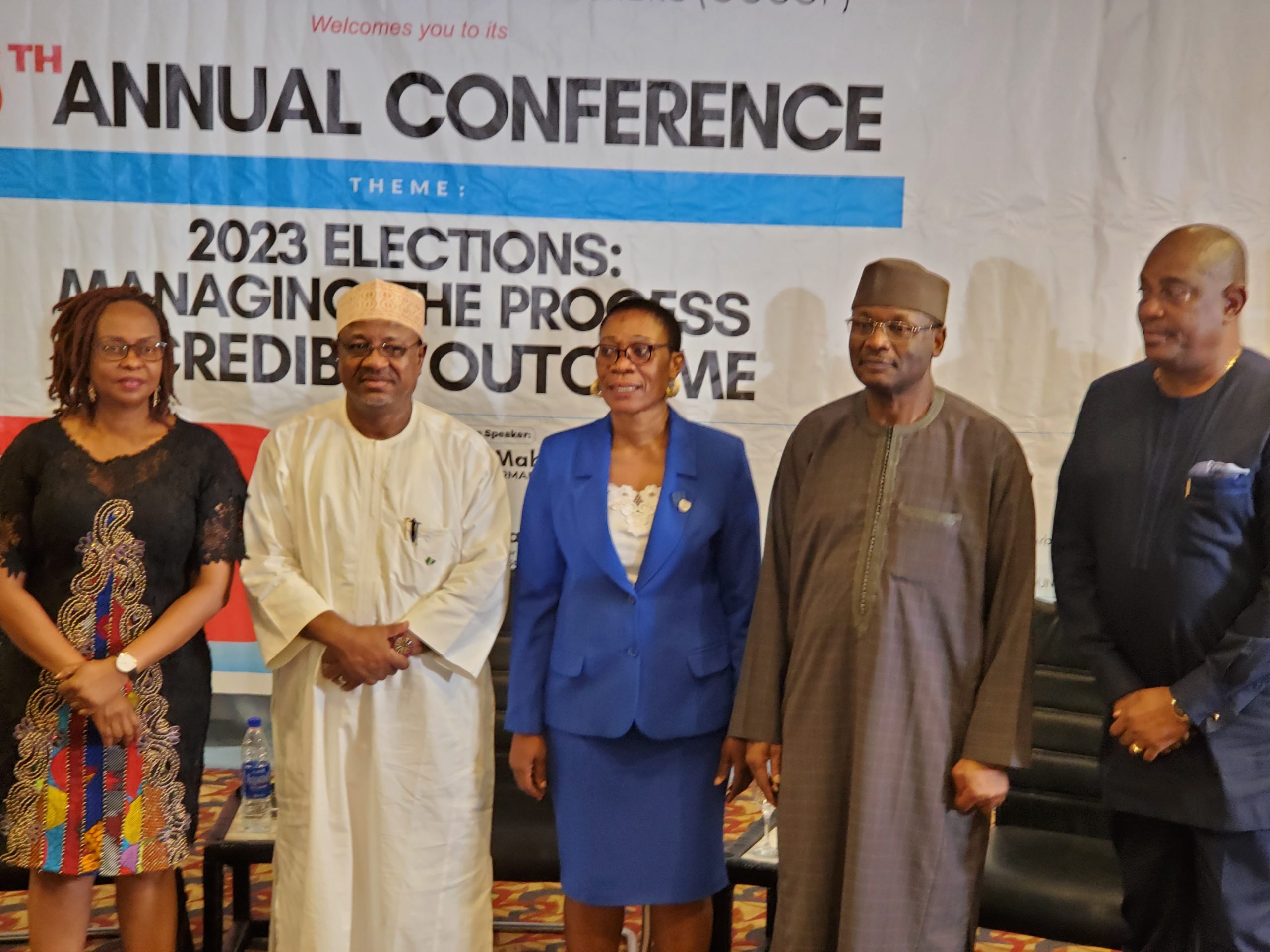 Election is the process whereby the adult citizens choose their representative to govern them (Afolabi 2018). Election encapsulates the mediating institutional and psychological process and anchors for citizens, as adults in an organized and routinised manner to express their choice among those who seek public political office. In the political realm, election is expressed as the formal display of preferences by the governed, either secretly or openly, with the aggregation of the choice collated and transformed into collective decision on who governs based on the majority of the votes cast.

The United Nations Organization posits that while elections provide people with an opportunity to freely express their will, civil and political rights, especially the right to participate in public affairs, these events also exacerbate existing tensions and the risk of human rights abuses and violations. Electoral processes may also sometimes trigger arbitrary arrests and detention, torture, ill treatment, extra judicial killings, disappearances and other human rights violations.

Violence during elections in Nigeria, as has been experienced in the past, may be perpetuated by state and non-state actors before, during and after elections. The primary purpose of the involvement of security agencies in elections is to mandate them to provide electoral security, which has been succinctly defined as the protection of all stakeholders, activities and processes, election facilities and materials, and information within the pre-electoral, electoral and post electoral periods from harm or threat of harm to facilitate peaceful and democratic elections.

It can also be defined as the unauthorized use of the means of coercion in the electoral process which are designed and employed to alter, change or influence the voters’ choice, votes or voting trend with the aim of tilting or reversing electoral decisions in favour of particular individuals, groups or political party. It could be seen as actual and intended harm (violence) that is aimed at any person or property involved in the election process, or disrupting any part of the electoral/political process during the period with the ultimate aim of influencing electoral outcomes in favour of (a) predetermined individual(s) contesting elections.

Election Security may therefore be conceived as the system or plan designed to guarantee safety and protection from any form of hitch or impediment that can distort or compromise the conduct of free, fair and credible elections.

It involves what may be described as the process of protecting voters, candidates, polling officers, media, election observers, election materials, data and infrastructure in general, against death, damage or destruction, etc. during elections.

The current legal framework of elections and election security in Nigeria is founded on the Constitution of 1999 (as altered), the Electoral Act, 2022, Regulations and Guidelines for Conduct of Elections, 2022 and the Code of Conduct & Rules of Engagement for Security Personnel on Electoral Duty, 2020. While the Constitution is the foremost legal instrument on elections in Nigeria, it is followed closely in hierarchy by the Electoral Act which in turn empowers INEC to provide Guidelines and Regulations for the conduct of elections, as well as the Code of Conduct applicable to security personnel during elections.

According to Omotola (2010), the deployment of security personnel to the conduct of elections in Nigeria is based on the generalized violence which has become commonplace, with thuggery and sundry electoral malpractices that have consistently and prominently featured in Nigeria’s elections. Thus, election security is necessitated by a typology of conflicts, namely:

Asides from its nature as the nation’s primary civil force, the Nigeria Police Force is the lead security agency in election security management and there is litany of constitutional provisions and legislations that supports this position. The calendar and schedule of activities of the electoral process in Nigeria can be divided into; pre-election, during election and post election periods. The Nigeria Police Force has the mandate to provide security throughout the entire electoral process.

As a civil force saddled with the responsibility of maintaining the internal security of the State including before, during and after the elections (electoral process), the role and place of the Nigeria Police Force cannot be over-emphasized. This is more so given the generalized atmosphere of electoral violence depicted by the use of political thugs and miscreants to foment troubles, disruptions, crimes and disorderliness by the politicians in order to win elections. This has over time become a recurring phenomenon in Nigeria’s electoral democracy. This in turn has prompted the need for increasing deployment of Police personnel to the conduct of elections in Nigeria.

Subsection (1), “the Commissioner of Police in each State of the Federation and the Federal Capital Territory, Abuja, shall provide adequate security for proper and peaceful conduct of political rallies and processions in their respective jurisdictions and for the purpose, the Police may be supported by the Nigerian Security and Civil Defence Corps and any other security agency of the Federal Government”.

Subsection (2), “For the purpose of subsection (1), a person shall be deemed to be acting in pursuance of a lawful duty if he is acting in his capacity as a Police Officer or as a member of a security agency authorized to carry arms and is specifically posted to be present at that political rally or procession”.

Subsection (3), “notwithstanding any provision in the Police Act, the Public Order Act and any regulation made there under or any other law to the contrary, the role of the Nigeria Police Force and the Nigerian Security and Civil Defence Corps and any other security agency of the Federal Government in political rallies, processions and meetings shall be limited to the provision of adequate security as provided in subsection (1)”.

Subsection (4), “no registered Political Party in Nigeria, its aspirants or candidate shall be prevented from holding rallies, processions or meetings at any time for their constitutional political purposes and the Police shall in a consultative manner, resolve any conflict of time and venue between and amongst parties where such arises”.

The role of the Nigeria Police Force is not extinguished by the declaration of election results.  Some of post-election duties of the force include;

The Role of INEC in Election Security

Election security, especially with regard to securing of the vote, is a matter within the exclusive powers of the INEC to take decisions. This is to the extent that only the Commission is empowered to request for the deployment of relevant security personnel necessary for elections or registration of voters, and shall assign them in consultation with relevant security agencies. This is by virtue of section 27 (3) of the Electoral Act, 2022, which is similar to section 29 (3) of the Electoral Act (Amendment), 2015 which subsection was inserted subsequent to the original Electoral Act, 2010.

The proviso to the subsection however limits the Commission to “only request for the deployment of the Nigerian Armed Forces only for the purpose of securing the distribution and delivery of election materials and protection of election officials.” By implication, the Nigerian Armed Forces has a limited role to play in the election security provisioning. The agencies with the primary responsibility in this regard are the Nigeria Police Force and other sister security agencies called upon by the Commission to provide election security.

To this end, in 2010, INEC established a Standing Committee known as the Inter-Agency Consultative Committee on Election Security (ICCES) to facilitate effective election security management. The ICCES is composed of 19 security establishments each with specific roles consistent with their constitutional and/or statutory mandates. The establishments are:

The ICCES has the overall task of improving the management of election security in the entire country. The Committee’s specific objectives are to:[1]

It is in light of the foregoing, and the experiences encountered with election security challenges in previous election that the incumbent Chairman of INEC together with heads of two other institutional partners in election security management (the National Security Adviser and the Inspector General of Police) produced a harmonized Code of Conduct and Rules of Engagement for all Security Agencies in Electoral Duties.[2]The Code which was published in June, 2020 is published under the auspices of the existing Inter-agency Consultative Committee on Election Security (ICCES). The Code has two Parts namely: Part 1, Clauses 1.0 – 12.0 which covers Code of Conduct; while Part 2, Clauses 13.0 – 17.0 covers Rules of Engagement. There are six Appendixes, numbered 1-6.

Part 1, Clauses 1.0 – 12.0 respectively, of the Code contains general introduction of its inspiration; mandate of the ICCES in securing the electoral process; general guidelines; standard operational guidelines/rules; parade mustering/briefing and debriefing rules; dress and accoutrement rules; procedure/rules on management of political parties’ conventions, rallies, campaigns and crowd control on voting day; rules on use of force/lethal weapons; rules for escorting/protecting of electoral materials; rules of check points and roadblocks; general conduct; and conduct during elections amidst the COVID-19 Pandemic. Part 2, Clauses 13.0 – 17 respectively provides general rules of engagement; application of force; procedure for arrest; caution to personnel effecting arrest and reportorial requirement.

Appendix 1 of the Code reproduces Chapter IV of the Constitution which guarantees Fundamental Human Rights. Appendix 2 among others, reproduces the defunct section 29 (3) of the Electoral (Amendment) Act, 2015 (now section 127 (3) of the Electoral Act, 2022) empowering INEC to determine deployment of security personnel to secure the votes. Appendixes 3 and 4 relate to the provisions of the Police Act and Regulations on code of conduct and other service rules of the Nigeria Police Force. Appendix 5 sets out the Economic Commission for West Africa States (ECOWAS) Protocol on Good Governance and Democracy.

Finally, Appendix 6 reproduces Article 4 of the African Charter on Democracy, Elections and Governance; as well as specific election security functions of establishments which compose the ICCES. As the Code was produced in 2020, it has not been utilized for any major election except off-cycle elections held from June 2020 till date. A new updated version is yet to be produced. It is therefore to be assumed that the Code will be used for the forthcoming general election in 2023.

Although the proviso to section 27 (3) of the Electoral Act, 2022 limits the role to which INEC may request the deployment of the Nigerian Armed Forces only for the purpose of securing the distribution and delivery of election materials and protection of election officials, there is no clear guidelines for such deployment. This role has the tendency of potentially bringing the Nigerian Armed Forces into the arena of voting on election day, as electoral materials are delivered at distribution points and at polling units, with the potential of involving the military more directly in the electoral process, albeit to play what might be perceived as limited role but which constitutes a crucial element in the polling exercise. Without electoral materials, voting or polling cannot hold.

Whatever the military can provide by way of security can be provided by the Nigeria Police Force (NPF), which is a civil force with direct training in engaging the civil population, unlike the military. As a matter of fact, even the military has consistently re-affirmed their limited role in election security and declared that their role is to support the NPF as the latter has the primary responsibility to provide security during elections, only to be assisted by other security agencies including the armed forces. In the circumstances, there appear to be no clear justification for assigning such role of escorting electoral materials to the military. They are best restricted to the outer vicinity of election venues as used to be the practice. This is to avoid the unintended consequences of militarization of the electoral process of the country.[3]

Lack of clear guidelines on Command and Control

There should be institutional synergy. The ‘trinity’ of the civil society, security agents and the electoral body working for common purpose of public good can ensure that election are free, fair, credible and accord legitimacy to the government of the day.

The Constitution of the Federal Republic of Nigeria (199) as mended

Afolabi, O.S. 2018. The Police and the Electoral Process in Nigeria

[3] See Samuel A. Akanibo and Nuleera A. Duson “Militarization of Electoral Process in Nigeria: Changing the increasingly significant quagmire” (2021) vol. 9, no. 1, International Journal of Innovative Legal and Political Studies, pp. 63-73.

Why we delayed take-off of APC presidential campaign – Keyamo