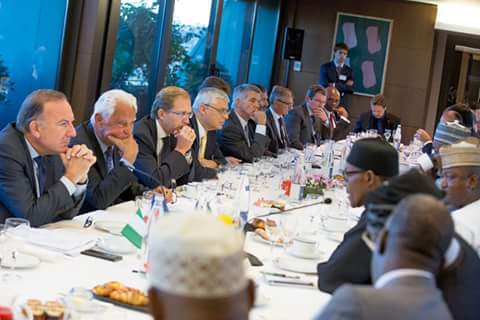 With €130 million to be ploughed into Nigerian economy, the most populous black nation is sure getting all the help its needs from the G7 and other advanced economies around the world.
President Francois Hollande told newsmen at the Élysée Palace in Paris Monday after a closed-door meeting between him and his Nigerian counterpart President MuhammaduBuhari.
France will invest the fund in infrastructure, electricity, and water, the News Agency of Nigeria reports.
Hollande also noted that in spite of the oil price that has hit rock bottom on the commodity market, Nigeria economy still remains strong.
Besides that, France will also offer assistance and support to Nigeria in the on-going campaign against Boko Haram.
Hollande and Buharidiscussed new strategies of partnership that would help Nigeria, Cameroun, Chad, Niger and Benin Republicfight the insurgency and restore peace by using the Multinational Joint Military Task Force.
“We provide all of the support to the countries in the region which are affected by this cult; and in Nigeria we want to provide support and solidarity,” the French president added.
The Multinational Joint Task Force will get assistance in key areas, including intelligence gathering and equipment.
Thanking the French president, Buhariexpressed his readiness to partner with France for the overall development of both countries.
“We have to depend on France and the other G7 countries for support to fight piracy,” he said, emphasizing how other members of the G7 will be of help in terms of intelligence and training.
Buhari also said the top club of the world’s leading economies will play a role in tackling piracy in the Gulf of Guinea.
“…That area is endowed with resources like petroleum and other minerals but surrounded by piracy and theft,’ Buharisaid.“We are going to depend on France and G7 countries to flush these criminals out of the region.”
The Nigerian president also noted his country is working hard to manage unemployment, another problem, in Nigeria.
“We are finding best way in agriculture and mining to address this challenge before sophisticated infrastructure and security are provided,” he said.
According to Buhari, 67 percent of the Nigerian youth are unemployed. The impact is obviously visible on the economy.
But Hollande said his administration will ensure French investors are active and visible in Nigeria.