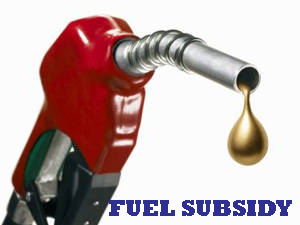 …as World Bank calls for removal

Contrary to expectations that President Muhammadu Buhari would remove fuel subsidy following series of complaints arising from its handling, the President did not only retain it but allocates the sum of N63.29 bn for it in the 2016 fiscal year.

According to the MTEF submitted the sum of N150 billion was earmarked for settlement of arrears of the 2015 subsidy on domestic consumption.

Also, President Muhammadu Buhari may have tacitly scrapped kerosene subsidy in the country as he made no allocation for it in the Medium Term Expenditure Framework, MTEF, and Fiscal Strategy Paper, FSP, which he presented to the National Assembly.

The document indicated that the present federal administration is to borrow N1.835.88 trillion to fund the 2016 budget which stands at N6.04 trillion just as it disclosed that a total sum of N350.33 billion misappropriated funds will be recovered in 2016.

Meanwhile, World Bank’s Lead Economist, John Litwack has advised the Federal Government to remove fuel subsidy in other for the industry to develop.

According to Litwack, the fuel subsidy appears to have vast modest benefits for the majority of citizens, but the costs are quite high. He said there is a strong tendency for the cost of fuel subsidy to increase over time as increasing domestic demand for petrol outpaces growth in oil output or revenues.

“The $35 billion cost of fuel subsidy during 2010 – 2014 was one of the reasons Nigeria was unable to accumulate a fiscal reserve in the Excess Crude Account that could have protected the country from the recent oil price shock.”

He explained that fuel subsidy obligations were expected to reach 18 per cent of all government oil revenues in 2015, pointing out that if the current regulated price regime of N87 per litre was maintained, subsidy was projected to increase to more than 30 per cent by 2018.

Share this on WhatsApp
Related Topics:2016 BudgetFuel SubsidyWorld Bank
Up Next