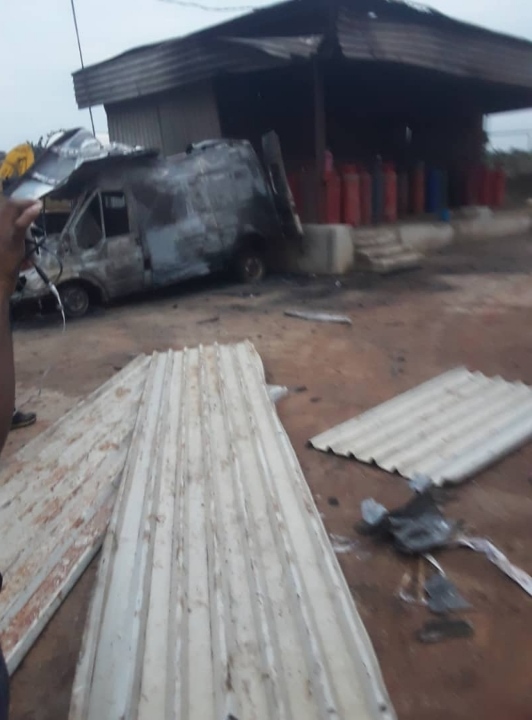 A gas tanker that exploded at a border community between Lagos and Ogun states on Thursday has cutoff electricity supply to neighbouring communities. The explosion which precipitated intense inferno left several cars and shops burnt. Some persons also suffered different degrees of burnt in the explosion which occurred at a location called Cele, adjacent to Grail Land, near, Ajuwon, along Akute road, on the outskirt of Lagos.

The inferno the emanated from the explosion which occurred at about 3.45pm, was concentrated on the road where the trailer crash into the drainage system on the opposite side of the road on coming out from the street where a gas station is located. The explosion also destroyed electricity infrastructure, breaking down electric poles, cutting off high tension and distributive cables. Communities near the scene of the explosion have been thrown into blackout until the electricity infrastructures are repaired.

Shops of artisans and retailers, an event centre in the scene were damaged. The two churches in the neighbourhood were relatively damaged. 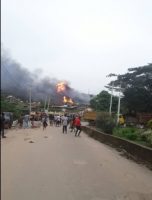 Eyewitnesses told National Daily that the driver of the truck escaped. The driver was said to have gone to the gas station at Cele near Ajuwon, SERATTO, to deliver supply. The gas dealer was said to have rejected the supply on claim that there is shortage of the quantity demanded and paid for.

While the tanker carrier was being burnt after an initial explosion that shook houses about one kilometer from the scene, the tank of the gas flew off from the scene across the street about 320 metres away into the next street to fall into a residential building. The gas tank while in the air, cut down electricity polls, broke the fence of the nearby building, then, hit the top of the upstairs before falling in front of the building at No. 10, Kayode Street. This caused a second explosion of the accident, though, not as dense as the first explosion which caused panic and fear among residents of the adjacent communities. There the gas tank exhausted the flames from the gas burnt. Luckily, the fire did not affect either of the buildings – Nos 8 and 10 Kayode Street.

Cars parked at nearby stalls were burnt, the truck-head conveying the gas cylinder, including the truck floor upon which the tank was fixed, were burnt to melting point.

Those who suffered burnt were said to have stood watching the inferno that erupted after the truck crashed across the road rather then run for their life before the explosion occurred. The explosion spread the tank content to the environment, burning anything within reach. The flying tank also spread the burning gas while in the air before it landed; this descended on some other people watching from a distance.

Calls were placed on the emergency numbers of Lagos State, which the receivers responded that the fire service operatives were on the way. Three water service trucks arrived the scene after the explosion and had to contend with the inferno which was extinguished within one hour.

There was no confirmation of any death. There was no trace of any burnt corpse during the assessment of destruction.

Workers at the gas station had locked up the premises and flee in the midst of the confusion. However, the interventionist operatives, including the Police had to force the gate open for damage evaluation.