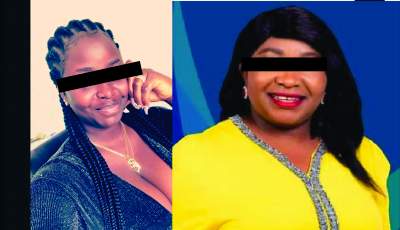 This may sound bizarre but it’s real. A girl of 19 years residing with her elder sister in the same apartment in a city suddenly fell in love with the sister’s husband. The girl was a secondary school student and she was being sponsored in school by the elder sister who took her from the village to the state capital. They live in a room and parlor apartment. (Identities withheld because of the exclusiveness of the story.) At the beginning of the ongoing secondary schools long holidays, in the month of July, the husband and the younger sister suddenly absconded from home. The lady commenced search for them.

The younger sister, unknown to the lady, has been in love with her husband and the sister became pregnant for her husband. At the point that the pregnancy could not be hidden and the husband could not agree with the girl on abortion, they both absconded from home.

Narrating her ordeal to National Daily, the lady expressed that she was unaware of what was going on in the house, that, suddenly her sister and the husband absconded from home to an unknown destination.

At the time the husband and the younger sister absconded from home, the lady was about three months pregnant for her husband. She has a set of twins who are 11 years and both are boys, and a girl who was six years; the pregnancy was her third expectation of child birth.

She said that in her ignorance, she sent message, the very week they disappeared, to the family at home to inquire if her younger came home for holidays. To her consternation, the sister was not at home. She then notified the home people that the sister has been away from home, including her husband; saying that they left same day and have not returned home.

The lady said that she is a petty trader struggling to assist the husband with feeding of the family, training of the children while also training her sister in the secondary school.

The lady then went in search of her sister and her husband. She reported to the Police. The lady said that she consulted a spiritualist the second week when she couldn’t get any clue about the whereabouts of her husband and younger sister, adding that she was in trauma.

The spiritualist revealed to her that the sister was six weeks pregnant for her husband and that they have both relocated to Aba, Abia State; about two states way from their residence. So, why the lady was three months pregnant for her husband, the sister was also six weeks pregnant for the same man. According to the lady, she wailed; called the native name of her sister three times; then asked: “is this how you want to pay me back for bringing you out of the village and training you in school?”

She was in agony and unmitigated anger. The spiritualist after watching her weeping bitterly, then, asked the lady what she wanted him to do, assuring her that both the sister and her husband will come back. The lady is anger requested spiritualist to curse her sister and the husband to become mad. The spiritualist granting her request, immediately invoked madness on the lady’s husband and her sister. She narrated that the spiritualist warned her that when she finds both of them, she should chain them before bring them to him.

Within few days, now in the third week, the lady’s husband and younger sister were found mad on the street. They were said to have found their way from Abia State back to their state of residence but couldn’t find their way back home since they were already insane. The lady said that no one knew how they came back. The man was found eating from waste dumps on the road side in the state capital.

People, who knew them, on identifying the man and girl, ran to inform the lady. She went on rescue mission with some young men who assisted her to catch them and they were brought home. The lady narrated further that unfortunately while they were not properly monitored, noting, that she forgot to put them in chains as instructed by the spiritualist; the husband and her younger sister suddenly ran away from home into the street. In the pursuit to bring them back home so they would go to see the spiritualist, the man and the girl ran into a car as they attempted to cross the road in a hurry to escape being caught by the people. They were both knocked down by the car.

The husband was then taken to the spiritualist in his madness. When the spiritualist was told about the death of the lady’s younger sister, he reminded her that he cautioned her to chain them when they found them. The spiritualist, thereafter, healed the man and restored his sanity. Suddenly, the man’s eyes were cleared; and in disbelief, the lady said, he was asking what they were doing at the spiritualist alter, how did they get there; and was asking the wife what had happened.

The spiritualist then told him that he has just been healed from madness and that the wife’s younger sister who he impregnated and ran away with was dead, and that she died with the six weeks pregnancy. The man broke into tears after the spiritualist told him: “someone has died that you have to be healed”, the lady said.

The lady said the husband was, thereafter, in deep thought for hours and couldn’t say a word, not even an apology. The man was overwhelmed with shame.

She said the younger sister was taken to the village and was buried there in the third week of the incident and that was the last week of July. The sister was buried two days before the husband was cured of his madness; so, the man was not even aware of the death and burial of his illicit lover.