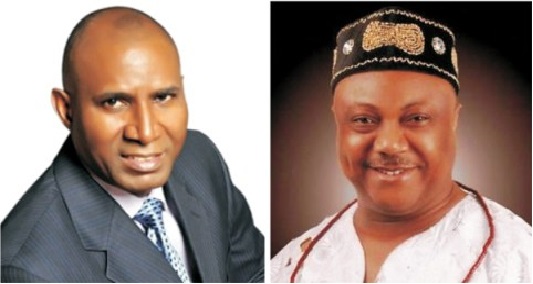 It was an unusual fanfare and assemblage of political heavy weight in the All Progressives Congress (APC) in Delta State as tumultuous crowd stormed the Nation Convention Arena last Sunday, August 13, 2017, to receive their celebrated leaders in the state who were on home visit to Abraka.

Abraka stood still as the People’s General, Chief Great Ovedje Ogboru, and the Senator who dethroned the former Peoples Democratic Party (PDP) in the area, Obarisi Ovie Omo-Agege, touched down on the soil of the community.

Market operations in the town were put on hold; virtually all market women abandoned their shops enmass to receive their very own, conceived as the hope of Delta, the People’s General and the Baba empowerment Omo-Agege, who was accompanied by Great Ovedje Ogboru.

The women turned the scene to carnival, singing heroic songs and praising God for blessing Delta State and the Urhobo Nation, in particular, with the two great sons-of-the soil, considered the hope of light for the masses in the state. They were said to have heaped curses on the Okowa/PDP government for inflicting pains and suffering on the people of Delta State, signaling the subtle resort to the APC.

In a statement, indicated that the Nation Convention Arena Could not hold the crowd that came for the occasion, as the Three Thousand Capacity Hall was not even enough to contain those from the Delta North alone, noting that people outside the hall were more than those inside.

“It was a reunion and reunification of the heroes of democracy, as all those who have been fighting to ensure true democracy is enthroned in Delta State, all came together again.  All opposition forces across the state came together to form a common front to pull down the walls of impunity, tyranny, oppression and retrogression build by the PDP since 1999,” Ayomanor declared.

He also stated that “Since it was a gathering of all progressives and heroes of democracy across the state, under the platform of the All Progressives Congress (APC), it became necessary to lay to rest, the old name “Light of Labour” that emanated from the then Labour Party, on which platform the Super Senator rode to the Red Chamber of the National Assembly.”

He narrated that after the sober moment of laying to rest the “Light of Labour” came the birth of the Mother of Democracy, the Light of APC Delta State, an umbrella body that covers all progressives across the 25 LGAs of Delta State. This was aids to have brought joy and smiles into the faces of all present, and there was jubilation all over, as the National Women Leader of the Rescue Delta 2019 Team Ogboru/Omo-Agege, Prophetess Mrs Onajite, took over the microphone and the entire audience sang praises to God Almighty for the birth of the “child of hope”, the Light of APC Delta States.

Omo-Agege had assured the crowd of the readiness of the APC to take over Delta State from the hands of the destroyers of democratic norms and values, the People Destroy People (PDP). The Senator He blessed God for giving President Muhammadu Buhari to Deltans, as a gift. He said that with President Buhari, corruption and impunity will soon die a natural death; and stealing of the people’s electoral mandate is fast becoming a thing of the past.

The Senator also assured the people that his empowerment program will continue as long as the government remains; adding that the continuous continuity will ensure it gets to everybody, including the churches.

He disclosed that over 200 students in higher institutions have been enlisted for bursary under his empowerment programme. The Senator proposed a slogan for the group “winning together” this slogan was unanimously accepted by the people and they echoed it repeatedly till it sank into everyone’s inner man. Light of APCccccccc! Winning Together!

Light of APCccccccc! Winning together!

Chief Frank Ovie Kokori, who also spoke at the occasion, expressed great joy in this rebirth, he said he has always prayed for this day to come. According him, his heart is at rest, now that the People’s General has finally stepped out to take over the state on the APC platform, which is in control of the Central. He enjoined all APC faithful across the state, to be relaxed, that this time around, no man can use the powers of the presidency to steal our mandate anymore, that he’s going home now to relax as the father of the government come 2019, because he knows Okowa cannot stand the weight of the People’s General.

The leaders agreed that, it was very important to set up some Steering Committees that would be directly responsible for certain operations of the group. Though it was agreed that such committees would be set up at a later date, the leaders also found it expedient to announce the name of the Chairman of the Media and Communications Committee, which is expected to spring into action immediately, while the members and all other committees will be constituted on a later date by the leaders. After a critical review of the names of people qualified for the job of the group’s image maker, the leaders unanimously agreed on the choice of Hon. Engr. Elvis Ayomanor, from Sapele Local Govt. Area as the Chairman, Media and Communications Committee, and was  announced by High Chief Fred Obe from Isoko South LGA. His choice as the Director of the group’s media team was well received by all, as the audience rose to applaud him, shouting “this is a square peg in a square hole”

In his vote of thanks, the People’s General thanked all those who were able to make it to the occasion, irrespective of their tight schedules and the short notice given. He assured everyone, of his readiness to liberate Delta from the shackles of PDP.  According to him, “it is my destiny to liberate my people and give them a better life” He promised more of such gatherings would be called from time to time across the three senatorial districts.

Dickson at crossroads of PDP reconciliation