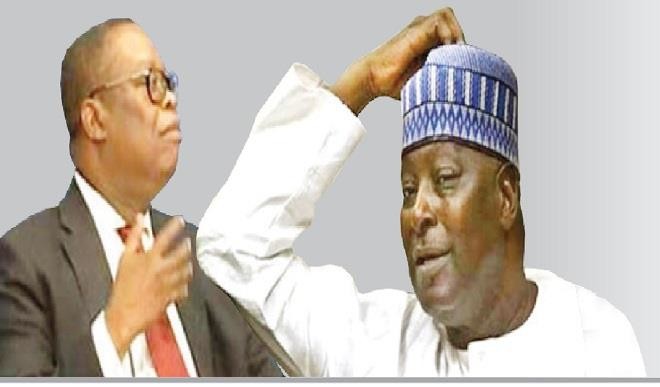 Share this on WhatsApp
Spread the love
A Civil Society Organisation, “Say No Campaign”, on Thursday challenged the Presidency to make public the reports of investigation of alleged fraud against some suspended Secretary to the Federal Government, the Director General, National Intelligence Agency (NIA) and other top government officials.
The Convener, Mr Ezenwa Nwagwu, disclosed in Abuja that the involvement of the former Secretary to Government of the Federation in the grass clearing scandal, Mr Babachir Lawal, and former Director-General, National Intelligence Agency, Mr Ayo Oke, in the recovered $43m at Ikoyi mansion, cannot be swept under the carpet.
Nwagwu explained that the presidency should make public the committee’s report headed
by Vice President Yemi Osinbajo.
While expressing shock over the silence from the presidency, noted that almost two months its report of the investigation to President Muhammadu Buhari, the FG has choosing the path of silence on it rather than making it known.
Nwagwu reiterates, “What remains unclear is why the president instituted a panel to conduct the investigation, and why the EFCC was not directed to handle the cases from beginning.
“Regardless of these anomalies, the president maintains silence, making justice to remain delayed and the anti-corruption fight, led by the president, himself, in jeopardy.
“While the desire of the current regime to fight corruption is unequivocally stated, the mannerism or body language of the chief executive, in the face of corruption allegation against certain public officials within the inner circle, betrays this noble intent.
“The reality of seemingly protecting `sacred cows’ stares us right in the face and thus has become difficult to ignore,” he said.
ALSO SEE: Gowon @ 82: Speaker Dogara pays tribute to former head of State
A co-convener of the group, Mr Jaiye Gaskiya, called on the president suspend the Inspector-General of Police to enable the Economic and Financial Crimes Commission to investigate corruption allegations against him.
He observed that instead of commending the Senator for speaking out corruption allegations against the IGP and suspend him pending the outcome of an investigation, “the government decided to take the whistleblower to court.
“What is even more worrisome about all these is that the Attorney-General of the Federation would take on the task of suing on behalf of an individual against another individual.
“The above issues involved massive amounts of money and has equally garnered enough public outcry such that the president cannot afford to remain quite on those matters any longer.
The group, therefore, enjoined the EFCC, Independent Corruption Practices and Allied Offences Commission and the police to take up their constitutional responsibility to investigate the cases of corruption against the IGP regardless of the position of the public official.
In addition, National Daily learnt, the  judiciary should step up and reposition itself to deliver justice without fear or favour while the executive and legislature should provide support for the implementation and enforcement of recent directives of the Chief Justice of Nigeria on the resolutions of the National Judicial Commission.
Share this on WhatsApp
Related Topics:"Say No Campaign"Civil Society OrganisationcorruptionMr. Ayo OkeMr. Babachir LawalNational Intelligence Agency (NIA)
Up Next

We will soon reveal names of suspected looters – FG