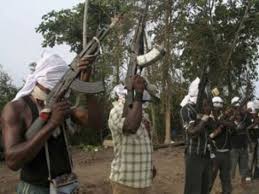 A source from the community identified to be a member of the Birnin-Gwari Vanguards for Security and Good Governance, was said to have narrated that the armed bandits arrived in the middle of the night to attack the Maganda village.

“Last night around 1.30 a.m., some armed bandits invaded Maganda community and started shooting sporadically. After a while they invaded the residence of Alhaji Adamu Nakwalla and abducted three wives. They later released one of the wives with a telephone number to contact them.

“Before the incident, they had sent a warning message to the people in the community that they would come soon.

“As at the time of the attack, there were neither security post nor security personnel in Maganda. In fact, we have no single police post in the area,” he narrated.

The gunmen struck a week after the Chief of Army Staff (COAS), Tukur Buratai, ordered soldiers assigned to the area to flush out armed bandits that have been terrorising and killing people in the area.

Though, no life was lost instantly but there has been palpable fear and tension of insecurity in the community.

Share this on WhatsApp
Related Topics:Adbuctionarmed bandits
Up Next