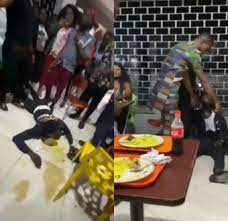 Lawrence Chukwu, his wife Chizoba, and older daughter Nazareth went to sleep after meal that night. Their maid Ukamaka prepared the food they all—except Nazareth’s babysister that was still sucking—ate.

It happened to be their last supper.

The entire family, except their baby, woke up battling to survive.

Neighbours at Ugbo Paul, Abakpa Nike, saw them gasping for life, and took them to hospital where, one after the other, they all, except one, succumbed to death.

“We didn’t know what was wrong with them and they were immediately rushed to the 82 Division Army Hospital. Later that day, their maid died,” a neighbor told the Punch.

“After a series of tests, we learnt that the food they ate before they went to sleep on Friday night was contaminated with a poisonous substance. Unfortunately, all efforts to save them failed, as the man and his wife died on Saturday, and on Tuesday morning, their two-year-old daughter equally died,” she added.

Chizoba’s mother was later called on the phone

According to her, she got there still hoping for a  miracle at least.

But one after the order, the house help first died, then their daughter, and the couple.

The only one left behind needs all he help to survive.