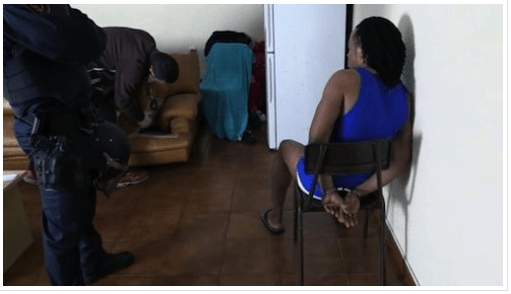 In a renewed effort to eradicate international sex-trafficking gangs, the Catalan police have smashed a notorious gang known as the Supreme Eiye Confraternity (SEC), or the Air Lords following a raid on their residential building.

According to BBC’s Sam Piranty, who was given access by the Catalan police, Mossos D’Esquadra, to an investigation into a Nigerian sex-trafficking gang, spoke to some women rescued from sexual slavery before filming an early morning raid in November leading up to the arrests of 23 persons.

It was learnt that the gang has also perfected London as a gateway into ferrying unsuspecting young girls into Europe.

The Catalan Police Headquarters located on the outskirts of Barcelona, Xavi Cortes, engaged 22 teams in the operation comprising 250.

The masked police officers, who carried out surprised operations by knocking down doors and rushing into the apartments where those gangs are resident, arrested the leaders of a Nigerian-based group running an international sex-trafficking ring in Barcelona arresting 23 members of the Supreme Eiye Confraternity (SEC), or the Air Lords.

The planning of the operation was said to have lasted about 18 months which involved monitoring more than a million phone calls, tapping dozens of mobile phones and months of surveillance.

It was gathered that Cortes and his team first came across the group in 2011 during a forgery investigation, but quickly discovered it was a huge network trafficking women and drugs.

Further revelations indicated that Eiye which means “Bird” in Yoruba language had an insignia of an “eagle” with each city containing members called a “nest”, with the “mother nest” in Ibadan, South West, Nigeria.

Cortes added that the group now traffics human beings and narcotics (cocaine and marijuana) and forges passports. It has also facilitated the transport of stolen crude oil into Europe. “They are able to earn money in many ways, but we are focused on human-trafficking and the victims.”

One of the rescued women, Destiny, who was 19 when she was trafficked to Spain three years ago, said she knew sex would be involved but had never imagined she would be turned into a sex slave.

“If you live in Benin, there are many girls who came back from Spain with lots of money. They told us they had to have sex sometimes,” she says. “We are not stupid but I did not know I would be beaten and raped and have to have sex every night, everydayis of the week.”
Once recruited, the girls are then taken to Lagos or to northern Nigeria where they are picked up by men known as “coyotes” or “trolleys”.

Another woman known as Sarah, who was herself trafficked gave a horrifying details of how women are trafficked into Europe. Sarah, who arrived in Spain in 2013 at the age of 21 said, “One of the girls kept asking for water. The men did not like it so they threw her out in the desert in Libya. They left her and we continued the journey. They told the boss on the phone that she was killed by terrorists. We were not human beings. We were animals.”

Once girls are trafficked across the desert, they are then taken to “keepers”, who often rape them before they cross to Europe. When we got to Libya they put us in a house. This is when I knew we would not be working in a supermarket. One man was taking care of us. He would have sex with us, rape us. Then I became pregnant.”

Women who insist they will not work as prostitutes are tied up in a position called “the crocodile”. Their hands tied to their feet, they are left for days with no food or water. Some are left to die as an example to others. Keepers often get the women pregnant prior to making the crossing to Spain.

“With a child or pregnant, they stand a better chance of not being deported, and the men can use access to the child as a form of blackmail to keep the women under control,” she added.