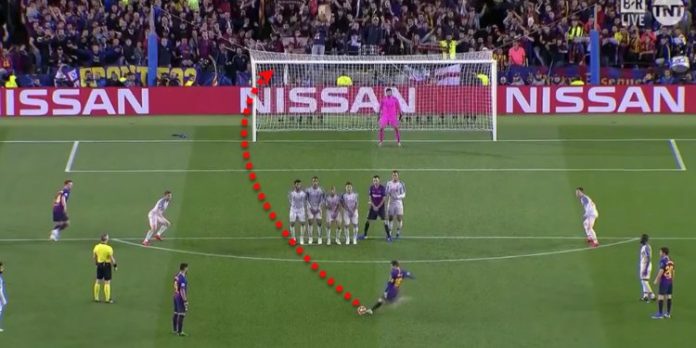 Share this on WhatsApp
Spread the love
A two-goal performance from Lionel Messi, punctuated by a sensational goal via free kick, powered Barcelona to a 3-0 victory over Liverpool in the first leg of the Champions League semifinals on Wednesday night at the Camp Nou in Barcelona.
Luis Suarez opened the scoring in the first half, before Messi bagged his brace in the second 45 minutes, the second goal being an absolutely stunning free kick executed by the Argentine.
Yet it was far from a dominating performance for the Catalonians. Liverpool asserted their control for large swaths of the match and only a lack of finishing prevented Jurgen Klopp’s men from finding a goal. But Barcelona did well to withstand the Liverpool pressure and delivered a pair of late blows via Messi to take a commanding lead in the tie.
The big takeaway from Barcelona boss Ernesto Valverde ‘s starting XI was the inclusion of Arturo Vidal in midfield over Arthur, while Sergi Roberto got the nod over Semedo at right-back.
ALSO READ: Like United, Like Liverpool: 12 Things we learn in Barca match against Liverpool
It was not the cleanest of starts from Barcelona, who looked a little shaky in the back while dealing with Liverpool’s high pressure and were equally imprecise in the final third. The hosts did have a shout for a penalty when the ball hit the hand of Matip in the area, but referee Bjorn Kuipers thought otherwise.
The speed of Liverpool’s attacking force was giving all sorts of headaches to Barcelona centre-backs Gerard Pique and Clement Lenglet, but just when Barcelona looked at their most vulnerable, a moment of magic between Jordi Alba and Suarez ended with the opening goal. The left-back collected a pass and played a cutting pass to the Uruguayan, who delicately redirected in past Allison for a 1-0 Barcelona lead.
Liverpool looked to respond right away and a fantastic ball in from Jordan Henderson for Sadio Mane should have been finished off by the Senegalese, but the shot spared goalkeeper Marc-Andre ter Stegen and went over the crossbar.
Still, the Reds had every reason to feel confident about pulling level as the second-half started and they nearly did just that through James Milner, only to be denied by a sprawling Ter Stegen. That was followed by another save on a stinging Mo Salah shot.
By the hour mark the tempo and pace were to Liverpool’s liking, so in hopes of regaining control, Valverde went to his bench and brought on Semedo for the very ineffective Philippe Coutinho, thus pushing Sergi Roberto forward into midfield.
Similar to the first half, when a Liverpool goal looked the more likely possibility, Barcelona struck for their second of the night. Messi slipped a ball into Sergi Roberto, whose pass deflected to Suarez, with the former Red then trying to score the bouncing ball with his knee. His shot hit the crossbar and fell to the charging Messi, who controlled perfectly with his chest and had the easiest of touches into net for a 2-0 lead.
What would happen next is sure to go down as one of the finest strikes one will ever see in Champions League history. Barcelona won a free kick from about 30 metres out and Messi, who has been scoring free-kicks all season, made this one a special delivery, as his left-footer curled perfectly into the top left corner of net for a 3-0 Barcelona advantage.
There was still time though for Liverpool to pull a crucial away goal back and they looked set to do it, but Ivan Rakitic made a goal-line clearance of a shot, which was then followed by Salah hitting the post with Ter Stegen out of position and just two field players to beat.
ALSO READ: Van Dijk: Nou camp thrashing made me a better player
Barcelona, too, had two fantastic looks in stoppage time and substitute Ousmane Dembele was all alone in front of the Liverpool goal, but scuffed his shot right at Allison on the final kick of the game.
Nevertheless, it is a sizable advantage for Barcelona, who will now look to punch their ticket to the final next week at Anfield.
Match Sheet:
3.- Barcelona: Ter Stegen, Sergi Roberto (Alena, min. 93), Pique, Lenglet, Jordi Alba, Busquets, Rakitic, Vidal, Coutinho (Semedo, min. 60), Messi, Luis Suarez (Dembele, min. 93).
0.- Liverpool: Allison, Gomez, Matip, Van Dijk, Robertson, Milner (Origi, min. 87), Fabinho, Keita (Henderson, min. 24), Wijnaldum (Firmino, min. 79), Salah, Mane.
Goals: 1-0, min. 26: Suarez; 2-0, min. 75: Messi; 3-0, min. 82: Messi
Referee: Bjorn Kuipers (Netherlands) Yellow Cards: Lenglet (Min. 39) for Barcelona, Fabinho (Min. 80) for Liverpool, Suarez (Min. 80) for Barcelona, Jordi Alba (Min. 88) for Barcelona
Red cards: None
Stadium: Camp Nou
Attendance: 98.299
Share this on WhatsApp