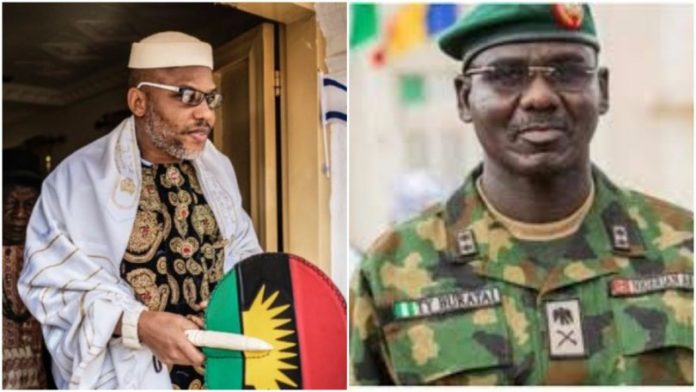 Counsels to IPOB leader Nnamdi Kanu has declared their client missing, and are asking the federal government to produce him.
The legal team led by Mr. Ifeanyi Ejiofor ‎said it had, on Wednesday, filed a suit before the Federal High Court in Abuja praying for an order directing the Chief of Army Staff, Lt.-Gen. Tukur Buratai, to produce Kanu in court.
Ejiofor disclosed ‎this in a text message sent to Sahara Reporters on Wednesday.
“We just filed an application for prerogative order of habeas corpus commanding the Chief of Army Staff to produce Nnamdi Kanu in court,” the text message read.
ALSO SEE: Genocide looms in Igboland
Ejiofor stated in the draft filed that the COAS is in the best position to produce Kanu in court.
He added that Kanu was last seen after soldiers, on September 14, invaded the IPOB leaders house in Afara-ukwu Ibeku, Umuahia Abia during a murderous raid, where life and mortar bullets were fired on unarmed and defenseless populace, leaving 28 persons dead.
Kanu disappeared the Friday the Southeast Governors Forum proscribe the separatist group–and the moments after which the Defence Headquarters tagged IPOB a terrorist organisation.
PV: 0